Shortest Trip to Earth is a Fun Struggle

“I’m giving it all she’s got, Captain!” my engineer would have yelled if the characters in Shortest Trip to Earth could speak. But she worked overtime boosting the engines, trying to make the most of the aging system. She never saw the unspeakable tentacle beast coming—it boarded the ship just moments before, but my engineer was told to do her job, and she did it until she was zapped. I was going to need a new engineer fast. I tried to boot up the stasis pods to let another crewmember take the job (and maybe zorch the tentacle beast in the process), but that’s when the nuke hit. My stasis pods went up in flames, taking the lives of two slumbering crewmembers.

That’s a pretty typical scenario in Shortest Trip to Earth, a new entry in the increasingly robust genre of roguelike crew games. Every journey is different, but by achieving milestones you unlock new ships, starting bonuses, and even permanent stat increases. It’s a game best typified by FTL, which is still the gold standard for the genre. Shortest Trip isn’t likely to make FTL obsolete, but it’s a really good time in its own right.

Where FTL is all about narrow corridors and hugely dire stakes, Shortest Trip is a little more relaxed than that. It’s not lackadaisical—this is a hard game. But most of the ships have a lot of space to move around in. Some of them even look sort of comfortable. There’s no enemy fleet bearing down on you, so you can take your time exploring. And you’ll want to! The randomly discovered scenarios are well written and frequently surprised me. One planet was inhabited by crystal spires which, when harvested, made for great fuel. We were desperate so my people started cutting them up, without fully understanding what they were. But every step of the way, we learned a little bit more until finally we encountered the brain spire. We had hurt the rock creatures already, but they might live if we left this bit alone. Or we could kill it and get a big prize.

There’s no tracked morality system in Shortest Trip, but there are fascinating consequences (which are often randomized between playthroughs). Maybe letting the brain spire live would prompt it to give you a new ship part, or new crew member. Maybe you just sail away with the assurance you did the right thing. Killing it will always get you an exotic material though, and that’s pretty worthwhile.

Compared to FTL, Shortest Trip feels like it has the potential to be really complicated. Once you get into the rhythm of FTL, you know the different kind of locations and even the best choices in a lot of the scenarios. Not so with the irrational number god of Shortest Trip’s RNG. That makes it less of a strategy game, but great for emergent narratives, which is a whole different beast. This makes the game feel a bit more like Rimworld, where you come for the story potential. 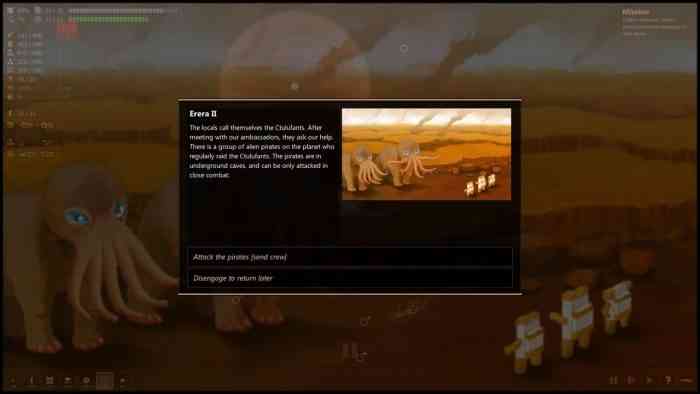 If it has a flaw, Shortest Trip’s great sin is the cumbersome menus. The game is real time with a pause, so you can take all the time you need, but the weapons controls are buried under just a few too many clicks. Same with the warp menu, which covers up the regular minimap, but does not pause the game. As for the main map itself, space is filled with a lot of emptiness, and thus your screen often displays a few sad pixels. A circle to represent a star, a few dots for planets, a triangle for your ship, and some blurry lines to represent space detritus. Maybe some of that can be re-balanced, and the tiny displays off the side can be made more appealing.

The game feels a bit unfinished so far, and that’s because it is. Shortest Trip promises ten unique zones in space. The current build has five. I’m struggling to get past the third one, but man is it a fun struggle. How much work the game gets between now and release is critical though. In the few hours I’ve played, I haven’t seen a lot of repeated scenarios, but the more quality writing that goes into this game, the better. I have a lot of confidence, though. It’s clear that Shortest Trip has all the makings of a PC cult classic, and developers Interactive Fate aren’t about to squander this game’s amazing potential.

The Crew: Orlando Will Be ‘a Completely New Game’
Next World War 3’s Promised Realism Does Little To Set It Apart
Previous Warhammer 40,000: Mechanicus Lacks Soul & Suffers From Unrelenting Grit