If you happened to have watched the Sony Presser before the E3 2017 festivities officially opened you may have noticed the almost lackluster response from the crowd after the newest Days Gone trailer rolled. There was a distinct lack of enthusiasm despite the game looking like it’s going to be pretty damn good. A general consensus from some of my peers was that Days Gone seemed to have an unlikeable protagonist and that it felt like a ‘Greatest Hits’ mashup of already successful PlayStation exclusives. A dash of The Last of Us with a peppering of Uncharted and you’re left with a game that feels like it lacks innovation and uniqueness. I have to say, that feels wholly unfair to Sony Bend Studio because after getting a closer look, Days Gone definitely has the chops to carve out a niche of its own.

Naughty Dog has raised the bar for PlayStation exclusives when it comes to narrative driven experiences with over-the-top set pieces. That’s something I think Bend Studio understands and isn’t explicitly attempting to emulate. Do they respect what Naughty Dog has done? Undoubtedly, but they also firmly believe that they have their own story to tell and some unique-to-them ways to tell it.

The demo I saw was the same as the demo shown at the Sony press event but with a few different variables thrown in to showcase how the game can change on the fly. We still saw Deacon St. John leaving from Copeland’s Camp (which looks sort of like a badass Ewok village) on his rescue mission for Manny, but instead of it being a rainy morning in the woods just before the sun breaks through it was a cloudy day with snow gently falling on the treetops. Incorporating not only a day/night dynamic but dynamic weather as well, missions can change depending on when you choose to pick them up. Essentially the game is a sandbox environment but there’s strategy involved that allows you to approach it any way you’d like. 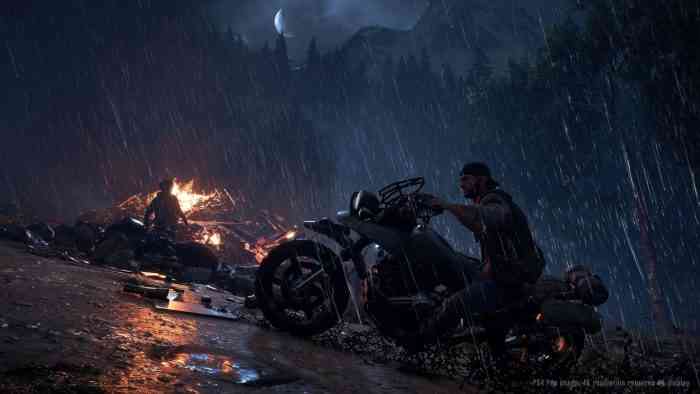 As the snow continued to fall you saw it slowly and quite naturally build up on the ground and surrounding foliage. Graphically, the game is gorgeous, even earning our Prettiest Pony Award for best graphics of the show but the weather has much more of an effect than just visual. Creatures react differently, enemy visibility can be reduced, sound can be dampened, your plan of attack has to be modified. In the press event demo, Deacon was set on by wolves at one point but not in our alternate path demo. The wolves aren’t as active when the snow falls but the Freakers sure are. In the end, while the mission was essentially the same, the journey from start to finish was completely different. Other mechanics at play were things like fuel management on Deacon’s bike (which is upgradeable, naturally) and an investigation/recreation system using what Bend called ‘survival vision’ to put together the pieces of a scene.  Demonstrating the harshness of this new world we saw Deacon brutally head stomp a marauder without even a hint of mercy which elicited a solid reaction from those of us watching.

“Let’s not write off Bend Studio’s upcoming game as nothing more than a ‘Best of’ compilation until we have everything laid out in front of us. I think we’re still in for a surprise or two.”

One particular encounter that stood out, and provided an excellent example of how differently you could choose to approach combat, was when Deacon snuck into a camp of marauders before making his final rescue. Instead of barging in with guns blazing we saw Deacon quietly approach from cover and disarm a waiting bear trap along the way. The bear trap was set up in a nearby bush as the player moved to another area of cover and threw a rock to draw in an enemy. This is a scenario that no doubt sounds familiar but what happened next was actually quite surprising. In the press demo, Deacon ran off at this point but in the alternate path demo I saw, he decided to stick around. The rest of the marauders came in to help their comrade which made for an easy kill via a Molotov Cocktail but before that happened we saw one marauder actually shoot the guy in the bear trap straight in the head because he was making too much noise. Noise, very likely, draws Freakers. It was another strong example of how brutal Deacon’s world has become. 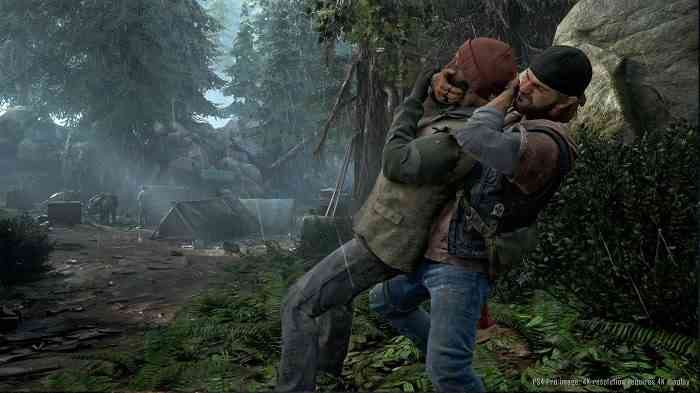 Stepping out from that demo I was left with a renewed sense of interest in Days Gone. Sure they’re using many mechanics we’ve seen in games before but if we’re being honest, how many games don’t? There were still some unique takes on things that are distinctly Days Gone and while a lot of the narrative is still shrouded in secrecy I have a sneaking suspicion that we’re also in for a hell of a ride in that department as well. Let’s not write off Bend Studio’s upcoming game as nothing more than a ‘Best of’ compilation until we have everything laid out in front of us. I think we’re still in for a surprise or two. 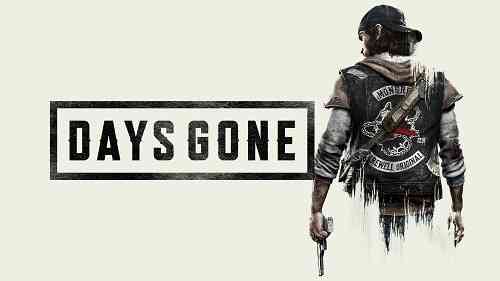