COG’s Most Anticipated Games of 2013

“Whoop! Whoop! All aboard the hype train express to Columbia and the world of Bioshock Infinite! I’ve bought my ticket and I’m not so patiently waiting arrival. It’s rare that I actually let the hype get to me, but everything I’ve seen of this upcoming title has me frothing at the mouth. The first Bioshock absolutely blew my mind, and knowing that proper care and attention has been put into Infinite by Ken Levine and crew (Bioshock 2 felt like a rush job), I’m sure that the floating city of Columbia will do the same. The main protagonist, no longer silent as the main character was in Rapture, is Booker DeWitt. What I’ve seen of his backstory seems quite interesting, and the relationship between himself and the damsel in distress, Elizabeth, even more so. I’m very much looking forward to seeing how it plays out. I know this is no Rapture, but every indication is that Columbia will be as good or better a playground. Gameplay wise, Infinite is shaping up to be a great experience and with the accompanying story I’m positive I’ll be riveted from start to finish. Ripping around on high-speed skylines while gunning down Patriots and Handymen in a glorious Steampunk inspired city in the clouds is sure to keep me trigger happy! Right now March 26th seems a long way away and the anticipation just might kill me, but should I manage to make it there alive, I’ll be sitting controller in hand ready to tackle the Songbird with full force!” 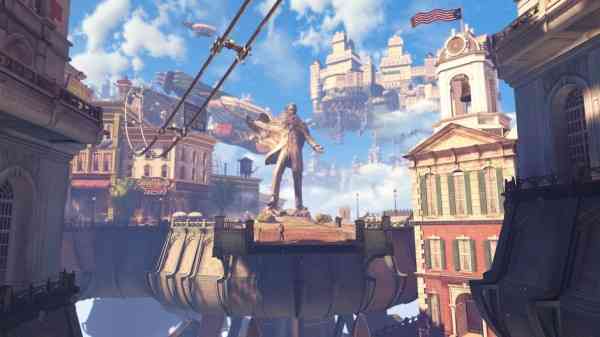 “As I look ahead to see what games are to be released in 2013, there is one game that I am craving to play the most. It is the third in a series of the most beautiful and atmospheric games that I’ve ever played – BioShock Infinite. Brought to you by 2K games and composer Garry Schyman (who did the music for the first two games), this game looks to be a winner; and may well be a contender for Game of the Year. Instead of being confined to the underwater city of Rapture, you now explore a floating city set in the early 1900s. The game is set for release in late March, so I hope to have some hands-on time with it at PAX East 2013 in Boston!”

“2013 looks to be a promising year for gamers. It’s surprisingly jammed packed with many highly anticipated titles, and I can’t wait to play many of them.  South Park: Stick of Truth, Splinter Cell: Blacklist, GTA 5 and Metal Gear Rising top my list, but the game I consider as my most anticipated is definitely Bioshock Infinite.  The hauntingly beautiful Elizabeth traversing around the steampunk looking floating city of Columbus, escaping the terrifying Songbird; Bioshock Infinite looks like it will be nothing short of spectacular. While it’s been plagued with numerous setbacks and delays, I have no doubt that Irrational Games will not disappoint. March 26, 2013 can’t come soon enough!”

“It’s times like this that I really wish I could stop time. Even with all the top notch games I’ve played this year, I still have a huge backlog of untouched titles to rush through. Time is short, and with the New Year’s just around the corner and so many blips on my radar for the upcoming months, choosing my most anticipated game of 2013 really is an impossible task. It’s true that my excitement for games like Bioshock Infinite, Metro Last Light and Grand Theft Auto V could hardly be greater, but if I’m forced to choose just one title – I’ve got to give it to The Last of Us. The gameplay videos and trailers I’ve happened on so far look flat out amazing; I couldn’t be more hyped for its release. Naughty Dog has really out done themselves on the visual aesthetic and presentation, which is frankly unsurprising considering their unparalleled work with the Uncharted series. And for me, you really can’t go wrong with the “Surviving the Apocalypse” motif – everyone loves a good end of the world story. Also, the similar father-daughter relationship Joel and Ellie share with Lee and Clementine’s from The Walking Dead Game has me somewhat optimistic for another epic adventure full of fleshed out story beats and well developed characters.  There’s something about humans working desperately to survive not only against tragedy, but against human nature itself, that always peaks my interest.  Only time will tell if the game lives up to the legend of course, but in my opinion, I think we’re in for a hell of a treat in 2013”.

“To really nail down my pick for most anticipated game of 2013, I had to carefully consider the meaning of anticipation: to expect, or regard as probable. Had the mission been to choose the most intriguing or thought provoking game of 2013, I may have picked Watch Dogs or Star Wars 1313. Alas, with little known about those projects, I can’t say I have any real confidence in their quality. With all that in mind, Naughty Dog’s The Last of Us is the engine of my 2013 hype train, and it will be pulling into anticipation station this coming May. The Uncharted team’s storytelling and production values are second to none, and this post-apocalyptic treasure makes my eyes water with expectancy. Seriously, I can barely afford to blink when new trailers are released – this game is astonishingly good to look at. With added elements of stealth, resource scarcity and human interaction, The Last of Us is poised to make a huge splash this May. I suspect that Microsoft and Sony will be blowing my mind with new hardware in the near future, but at this instant The Last of Us is the apple of my eye.”

“Considering it rivals Halo as my favourite game franchise, my most anticipated game for 2013 has to be Rainbow Six Patriots.  I am a little concerned that with so little news coming out for it that it might not be a 2013 release; even more so with us quickly approaching the end of the current cycle on consoles.  Could this be a launch title for the next round of consoles?  Perhaps but until I hear different from Ubisoft, Patriots is easily my most anticipated title of the coming year.”

“Metro 2033 was not a perfect gaming experience by any stretch.  Many, including myself, considered it a linear experience and one that had a tendency to become repetitive.  Yet for one reason or another it left some lasting impressions with me.  Whether it was those demonic dogs which scared the jeepers out of me or that riveting storyline, Metro 2033 just felt right.  While at E3 this past year, I had a chance to experience a private demo of THQ’s Metro Last Light.  Ever since the day I walked out of that demo room Last Light cemented itself at the top of my pecking order when it comes to my most anticipated games of 2013.  The visuals looked fantastic and that creepy claustrophobic feeling from the first game was proudly on display.  The developers assured me many of the issues from Metro 2033 have been addressed so there is plenty of reason for optimism this time around. Metro Last Light places you in vulnerable world and one that will surely be unforgettable when it touches down later this year.”

“As I pondered what I was really looking forward too, I was struck with more than a few games, but alas we were limited to one.  Before I say which one, let me tell you the others I considered before making my ultimate choice: Metro: Last Light, The Last of Us, Splinter Cell: Blacklist, Beyond: Two Souls, Rainbow 6: Patriots and Watch Dogs, just to name a few.  Not all of these are 100% confirmed for 2013 either, as we haven’t heard much since E3 2012.  So that brings me to my ultimate choice – Tomb Raider.   I for one am looking forward to this “reboot” of the franchise.  I have always been a fan of Lara Croft.  I remember playing the first Tomb Raider on my PSone back in the day.  Since then Lara has done as much as she can and this new game from Crystal Dynamics looks to kick start everything once again.  From the visuals to what looks like an engrossing story of how Lara came to be, I can’t wait to take her on this new adventure.  Look out adventure, here I come”. 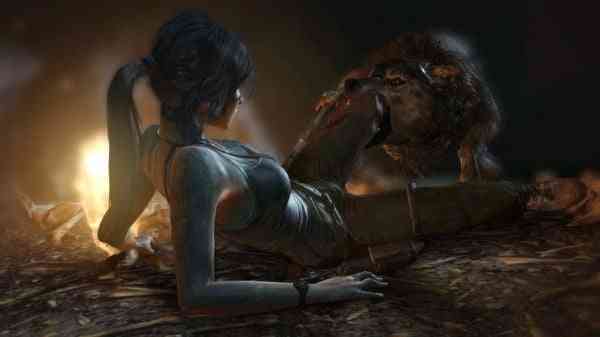 “Asking me to pick one game as my most anticipated title of 2013 is quite the chore, but I was able to narrow it down to three fairly easily with one coming out on top. My top three are Star Wars 1313, Tomb Raider and Splinter Cell: Blacklist. The one that came out on top is Star Wars 1313, mainly because of the new Star Wars story that we are going to get, the amazing graphics that have already been showcased and…come on, do I really need to spell it out it any bigger? It’s freaking STAR WARS that revolves around Bounty Hunters! If that doesn’t get you all joygasmed out, then you need to turn in your geek card immediately.

“After seeing that first demo at E3 I was completely blown away, and how could you not? The possibilities seem amazing and if it actually turns out to be half as good as it looks, I think they’ve got a serious hit on their hands. I’ve been clamoring to find more footage and learn more about the game which I don’t usually do, so Watch Dogs is easily my most anticipated announced game of 2013. Hype can be a dangerous thing, so I hope they deliver what was shown and is expected.” 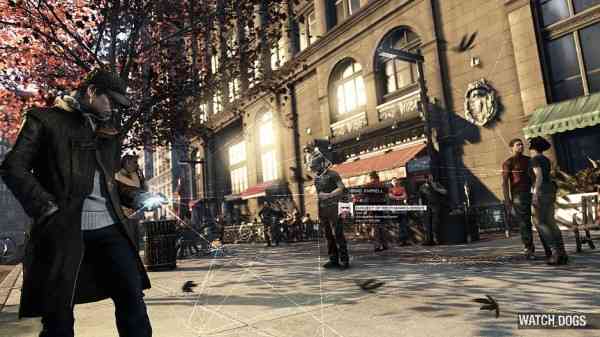 “I remember playing the original SimCity game a lot as a kid and loving it, and now I’m just curious to see how it’s changed since then. I am expecting some nicer graphics and the new multiplayer component that will enable players to join cities with each other. While there’s been grumblings about the requiring users to have an online connection, the hype has been good so far.” 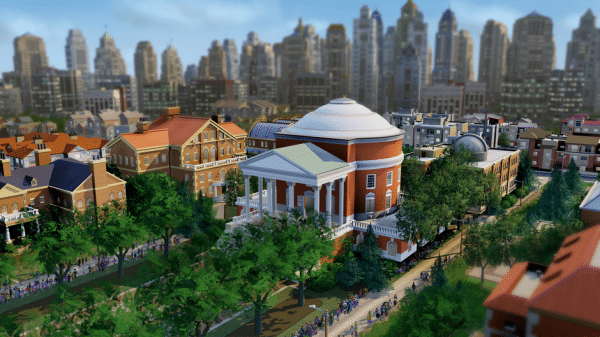 “Kojima Productions new Metal Gear could have easily been my most anticipated game of 2013.  But I am “Alien” junkie and I have been patiently waiting for Colonial Marines for quite some time. Colonial Marines takes place after the events of the second film, Alien 2. The story is told through the eyes of Corporal Christopher Winter. The Colonial Marine is tasked as part of a search and rescue team to investigate the USS Sulaco in search of Ellen Ripley, and Corporal Dwayne Hicks. The story and set-up is fantastic and after playing some multi-player at PAX Prime this past September, I’m eagerly anticipating the game. Colonial Marines has been in some kind development since late 2007.  Gearbox and Sega appear to have a hit on their hands but only time will tell. For now Colonial Marines remains my most anticipated game of 2013.”

“The Last Guardian has been on my radar for a very long time. In fact I remember watching the first trailer the day it was announced. Since that time, little snippets of information have been fed to the fan base. From what we’ve seen so far, the game focuses on the relationship between a boy and a mythological-looking beast named Trico. Given that the various trailers so far share similarities to both Ico and Shadow Of the Colossus, it seems like Team Ico will keep the same mysterious universe alive that they have been piecing together for years. The gameplay mechanics appear to involve a boy and Trico working together to tackle various puzzles. The only thing I know for sure is that the game looks gorgeous, and I can’t wait to find out more about this title. That being said, with such little information given about the game at this point, one can only hope that Team Ico succeeds in releasing The Last Guardian soon.” 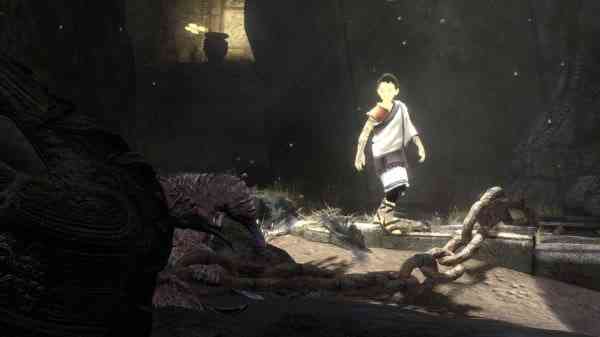