First and foremost, the betting utan svensk licens and demo offers up two different quests: a novice trek through the tundra to capture the rabbit-like Lagombi, while the hunt for the Pleisoth (think Gyarados with wings) is intended for series veterans. Regardless of which demo you pick, you’ll be forced to complete each hunt with only 20 minutes to spare, which is a letdown to say the least, since most missions in the full version of the game give you 50 minutes. 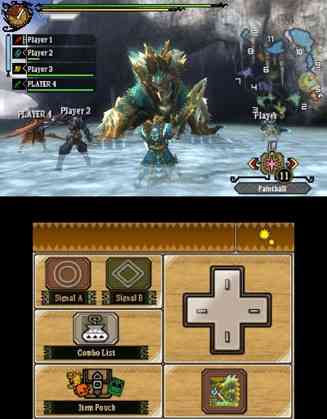 I spent most of my time hunting Lagombi, mainly because I have not played any other game in the series. The first thing that caught my eye was how good the game looked. While the graphics weren’t mind blowing by any stretch of the imagination (remember, this was originally a Wii title), the environments look great, and the game runs smoothly. I didn’t have much time to stop and smell the roses, so I quickly consulted my map screen and set off in pursuit of the Lagombi. And that’s when it hit me…

I had no idea what I was doing.

Granted, I wasn’t surprised, because I had never played a Monster Hunter game before. But for some reason I cannot fathom, Capcom didn’t include any sort of tutorial. While there is a manual you can read before you boot up the demo, you can’t bring it up during gameplay, meaning you’ll find yourself quitting the game more than a few times to give yourself a refresher.

So after re-reading the manual, and jotting down a few notes on a nearby scrap of paper, I took to the tundra once again. After a few minutes of moving from screen to screen, I stumbled upon the Lagombi, who unsurprisingly was not thrilled to see me. After fiddling around with the controls, I finally figured out exactly how to work my weapon of choice which at the time were dual blades. After raining blows down on the Lagombi for nearly 18 minutes, it finally died. I had a mixed feeling of accomplishment and apprehension. Sure, I was thrilled to have finally completed the quest, but the fact that it took me, a newcomer to the series, nearly 20 minutes was a bit puzzling, especially since I am fairly well versed in similar games. Before I jumped into the Pleisoth demo, I decided to try out a few other weapons on the Lagombi. Why you ask?  Well, before you start your quest you have the option to choose between 12 different weapon schemes. 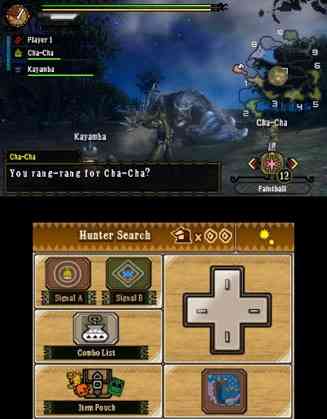 Unfortunately, I wasn’t successful with any other weapons. Not because I wasn’t able to use them properly, but I always found myself running out of time. For a demo that was intended for series newcomers, it’s a bit strange that I wasn’t able to complete it unless I used a certain weapon. It also didn’t help that the Circle Pad Pro isn’t compatible with the demo. Capcom has ensured that the full version of the game will allow players to take advantage of the peripheral, but for reasons unknown, you can’t use it in the demo. Still the default control setup works well enough; you can use the touch screen or d-pad to rotate the camera, and a lock-on mode allows you to reposition the camera to face the monster you’re fighting with the quick tap of the L button.

Following several fruitless attempts to slay the Lagombi with a different weapon, I switched over to the Pleisoth. To be honest, I didn’t spend much time with this half of the demo, simply because the level of difficulty was a bit too high for my tastes. Not only is the Pleisoth a harder creature to hunt, you have to constantly switch up between fighting on land and in water, which was too much for me. I did enjoy the landscape; the beaches along the Deserted Island look great on the handheld.

Even though the game’s combat is both deep and engaging, I was still left with a sour taste in my mouth at the end of the day. The lack of a tutorial and Circle Pad Pro support didn’t win me over, and I can only hope that the full version of the game does a better job at easing in series newcomers.

Monster Hunter 3 Ultimate is due out on March 19 for both the Nintendo 3DS and Wii U.  For now check out some of the screens below (*Editors Note*: Although we have a few screens of the 3DS game, the majority of the screens in the gallery are from the Wii U version):