The demo of Children of Morta just released on Steam. You too can grab it for a limited time as after Saturday, June 22, it will disappear. I spent a few hours mucking with it and walked away pretty impressed by what I initially felt was all too familiar. Fundamentally, Children of Morta cribs from a mix of games that have come before it: story is told through a narrator in the vein of Darkest Dungeon (though less morose), the action is isometric and click-based like the trappings of Diablo (without the loot treadmill) and the art style lives within the pixilated family seen in hits like Hyper Light Drifter and Dead Cells. It all gets put into a blender, given a proper story framing, and spat out into a rogue-lite dungeon RPG.

And it works. Mostly. You play as a member of the Bergson family (or two for co-op). They are a family of diverse heroes living in an isolated but beautiful forest under Mount Morta. The inciting incident is when John and Linda Bergson are out exploring and discover the woodlands around their home have become corrupted. This gives way to meeting an entire family of heroes dedicated to fighting this new evil from their mansion in the woods. It’s a cooky but endearing premise. Their grandma is their lore master, constantly digging through books. Their Uncle Ben is the weapon and armorsmith, who grants you family-wide upgrades.

Where isometric games like Diablo give you classes to spice up gameplay, in Children of Morta you have a different Bergson to choose from on each run (and you unlock more as you go). John is the stalwart warrior with sword and shield and plays like a traditional tanky melee character. Linda uses a bow and arrow and attacks from afar. 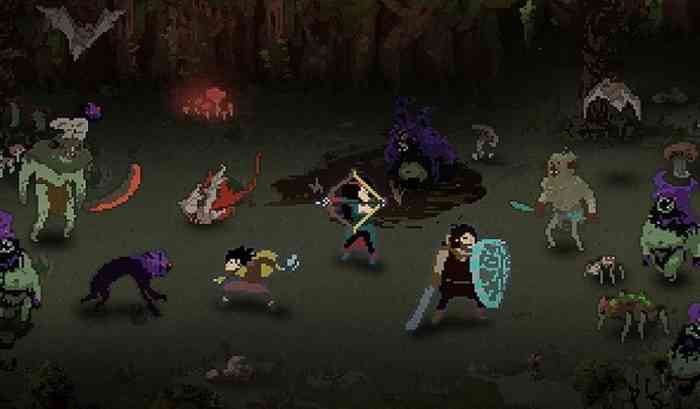 Each family member comes with their own skill tree of active and passive abilities. There is no persistent loot to speak of, and if you die before completing a dungeon, you will start from the beginning. In the early moments this can become tiresome and repetitive as the move-sets for each character are somewhat limited. As you survive longer, you will come across unique items that give your characters new abilities. This is where Children of Morta impressed me. Each run takes your core character, and through good play, allows you to find new items that can change up how they play. For John I found a lightning shield that would explode around foes, or later an item that gave me thorns, allowing me to feedback damage to my enemies.

It all works. The narrator brings you in like you’re hanging out near a warm campfire, listening to this epic tale. The art and animations can be absolutely beautiful and large in scale. And the tension of dying only to need to start again will keep you focused. What I can’t say yet is whether the depth and variety of skills is there or whether I’ll grow tired of starting over again with each character upon death. But if any of the above sounded like it was in your wheelhouse, then you’d do well to grab the demo and check out this family’s business.

** A Preview code was provided by the publisher **


Counting Down The Best Video Game Narratives of 2019