Breakwaters Embarks On a Perilous Voyage With Excellent Water Physics

Breakwaters is a promising new game that is trying to be three cool games at once. The miracle is how close it is to fully working. As an early access title, it’s a little bit hard to imagine what the final package will look like, but it’s not hard to see the potential. There’s enough going on that it could end up being its own cool wrinkle in the…are we calling it ‘crafting adventure’ genre? Whatever it is, Breakwaters tries enough ideas that are brand new, and it is well worth keeping your eye on.

Living Your Best Yo Ho Life

When you first load up Breakwaters you are treated to a pretty simple menu, accompanied by some very pleasant pirate music. Hey yeah, this feel great. And once you get into the game proper, you know the score. You’re on a tropical island with a day and night cycle. You can collect resources to craft tools, to collect more complicated resources. Eventually, you have enough infrastructure to start expanding a little base of sorts. You know the story. It’s Minecraft sure, and it’s also Subnautica and Stranded Deep and Valheim. All of those games are different in tone, but they have the same basic mechanics – advancing through the game by acquiring more and more resources. 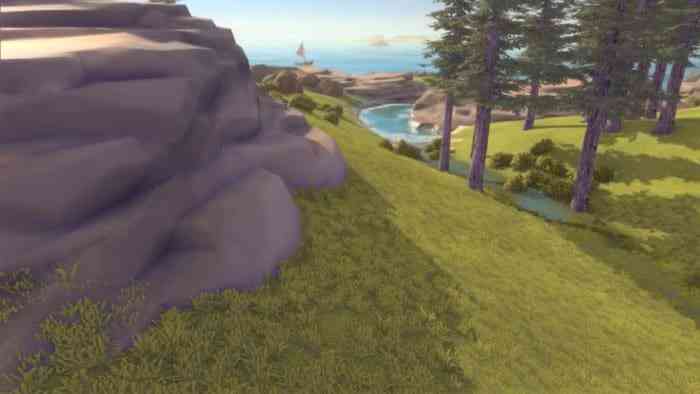 But Breakwaters has a lot to throw into the mix beyond the jaunty pirate vibes. Huge titans lurk off the shore. Lurk isn’t the right word, it’s more like they loom. And every so often, they will try to mess up your day with a huge blast of energy magic. All of your crafting efforts are eventually dedicated to bringing down these colossal bosses like some kind of nautical Shadow of the Colossus. It gives the game a structure and direction, which is deceptively important to games like this. It also carves out a unique tone, full of larger than life bombast.

Far from being deserted, the islands of Breakwaters are covered in little magical shrines and secrets. Your raiding tombs and digging up buried treasure. This is where Breakwaters rolls out its most unique idea, one that doesn’t quite fit into the bigger picture yet. Breakwaters is really interested in water physics. There’s the tide and the waves, but you eventually get your hands on some magic items that allow you to create air bubbles. We’re talking about like, spheres-of-no-water, that allow you to stride right onto the ocean floor and pick up cool items.

As with a lot of Breakwaters, the water mechanics aren’t all the way there yet. It doesn’t always feel right. Sometimes, you’ll accidentally clip into a wall of water, only to be carried away by the sea. Or you’ll aim your boat summoning grenade thing poorly, and then have to chase down your ride. Little stuff like that feels way more difficult than it should. Exactly the sort of thing you see with certain kinds of early access games. 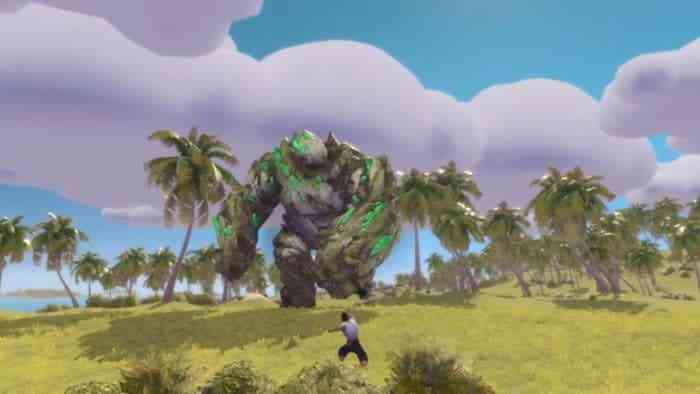 There were some issues with playability in the state I played the game. Text was sometimes small and hard to read, and I never quite got used to the floaty feel of the controls. Are these line items on a list of upcoming changes and fixes? Will they be fixed incidentally when other changes show up? Such is the experience of playing an extremely early access game. If you decide to try it, you’re more showing up for the ideas than a final product. The changes are part of the experience.

I don’t think it’s ever going to feel tight, but Breakwaters is more of a sandbox anyway. There’s a bare-bones quest system that you can see them adding more to, but the real fun of the game is in exploring the unknown and doing goofy things with sand and water. Crafting games can be sort of self directed and not lose anything, as long as the world is fun to spend time in.

And with the fun music and rollicking sense of adventure, Breakwaters is totally a procedurally generated island chain I’d be delighted to hang out on. The Dev team has been regularly adding updates. Many are patches that tighten up the bugs, but some add significant new content. One day they will hopefully overhaul the whole inventory system and the whole game will feel a lot more playable. Keep an eye on Breakwaters and maybe pick it up if you want to get into something cool before anybody else does.