Ubisoft held yet another E3 conference on Monday and, on the whole, it was a good showing from the gaming company. There were some great game reveals here and there but the conference was still missing that extra *oomph* that would’ve elevated it from good to amazing.

Let’s get to the best parts of the conference first.

1) Watch Dogs: Legion Looks Like the Most Interesting AAA Game in Years

Watch Dogs: Legion is game that many in the gaming community knew was coming due to a few hints and a couple of pre-reveal leaks but I doubt anyone could’ve anticipated just how interesting this game actually looks.

According to Ubisoft, every citizen NPC in this game’s dystopian London can be recruited into the player’s DedSec army and used to fight the mercenaries that have taken over the city. Each citizen NPC has a unique origin story mission, backstory, and voice but, despite this massive amount of detail, each of those NPCs can be permanently killed during gameplay. Everything about this game sounds absolutely nuts and I can’t wait to play it when it launches on March 6th, 2020.

I’m not much of a Rainbow Six fan but Rainbow Six Quarantine looks like neat new spin on a series that’s well-known for being a realistic tactical shooter. Ubisoft is being pretty tight-lipped about the game’s story premise but the developer did give some details about how the game will work.

This won’t launch until sometime in 2020 but it’s definitely something I’ll be keeping an eye on next year. Ubisoft did a great job at getting me invested in a new entry in a series that I barely have any interest in.

I wrote more about the details of the paid service after its initial reveal and I still have some lingering questions about its pricing (such as lower subscription fees) but overall I think that the promise of full access to the latest Ubisoft games for only $15 a month is pretty exciting.

During the Ghost Recon Breakpoint segment of the conference, one of the game’s voice actors, Jon Bernthal, brought his pitbull Bam Bam onto the stage. A picture of the adorable dog can be viewed below. 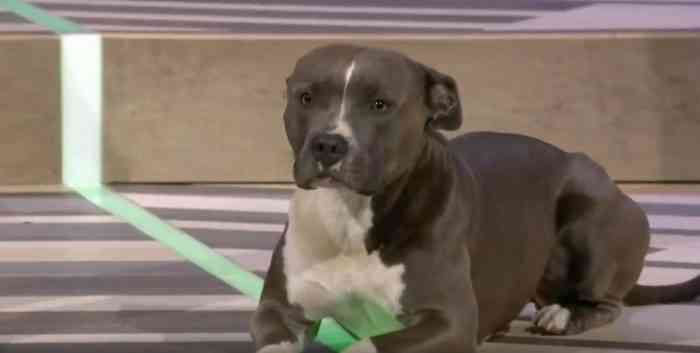 Bam Bam spent all of its time on stage just sitting there next to Bernthal. Bam Bam basically contributed nothing to the conference.

Assassin’s Creed Odyssey was one of my favorite games of 2018 and while I think that Ubisoft Quebec has been doing a great job with the Assassin’s Creed franchise so far, I also think that it’s great that the studio is working on a new IP like Gods & Monsters.

After how well Odyssey turned out, how can someone not be excited about Ubisoft Quebec making another game featuring mythological Greek creatures? The story premise alone is pretty enticing:

“From the creators of Assassin’s Creed Odyssey comes a storybook adventure about a forgotten hero on a quest to save the Greek gods. Embark on a journey to the Isle of the Blessed, taken over by dangerous creatures of mythology. Prove your legendary heroism by taking on their leader, Typhon, the deadliest monster in all of mythology in a face-off for the age. Explore a beautiful fantasy world where tricky puzzles, mysterious dungeons and heroic feats await. The journey will be as challenging and rewarding as the final destination. Will you be the Hero of the legends foretold?”