In addition to being a stylish and innovative shooter, Arkane’s Deathloop is an homage to the campy spy thrillers of the 1960s. In large part that retro atmosphere comes from the amazing and eclectic musical score by composer Tom Salta. Salta is a musical polymath, at times a composer, producer and recording artist with hundreds of film, television, video game and pop music production credits on his resume. Tom was gracious enough to answer some questions about his score for Deathloop.

As with most videogame scores, the composer joins the team at some point after development has been underway. “When [Arkane audio director] Michel Tremouiller approached me to score Deathloop, he had already created a very comprehensive music brief (50 pages long!), not only describing the game in great detail, but also with a very clear sense of the late ‘60s aesthetic he wanted to communicate with the music. Once I took some time to digest everything, I then began my own research on the music of that era and came back with some more references and approaches to discuss. Deathloop’s musical DNA is based on a very colorful and varied tapestry of instruments, tones and colors inspired by my personal lens of the late ‘60s and early ‘70s. I used instruments like, Rhodes, Wurtlitzer, Hammond B3, Clavinet, Mellotron, Electric Harpsichord, ‘60s drum kits, vintage synths, bass, guitars, strings, brass, etc. and often processed these sounds in ways that made them even more unique using effects of that era.” Unlike some recent scores, there are a lot of live performances mixed into the soundtrack.

“I brought in various live players to perform on a good part of the score.  Generally speaking, I would compose and arrange all the music first and then decide where live players would be most effective.  All the guitar you hear on the score is about 50% real and 50% me imitating guitars on keys. Some of the music features legendary jazz musician, Philippe Saisse.  I’ve known him since the mid-nineties, and he’s played with some of the biggest artists of all time. It was too tempting not to feature him in various places where it would stand out, especially when it came to jazz influences.  He is a monster and played multiple real instruments including Vibraphone, Rhodes, Mini-Moog and some fun virtual brass parts for “Charlie’s” music.”

Salta is known for his scores for action games like Halo and Ghost Recon, but as with any talented composer, those games only reflect one aspect of his musical personality. “I have done tons of action-focused games, but I have to admit that I often prefer to create music that is slow, dreamy, mysterious and tense. That’s the kind of music that really creates the “backdrop” of the experience, setting the mood. No matter what score I’m doing, my first priority is to establish an overall musical aesthetic with a unique personality…sort of like defining “who’s in the band”.  Once I have that foundation, I can go anywhere with it. High energy, low or anywhere in between.”

Part of the fun — at least to me — of listening to Salta’s music for Deathloop is playing the game of “spot the influences,” and the composer affirms that they were many. “I was influenced by a wide array of music from the late ‘60s and early ‘70s. Everything from artists like Jimi Hendrix, Frank Zappa and groups like Yes, Led Zeppelin, Pink Floyd, The Who, The Doors and yes, also the scores of early James Bond films and a certain 1960’s “caped crusader’s” series music as well.” 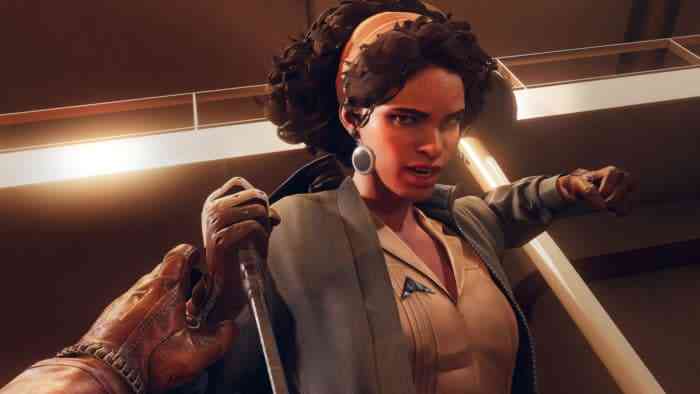 There is over an hour of original score in Deathloop, but players will notice that there is also a lot of diegetic music in the game, music that is not underscoring the action but heard in things like records playing or on the radio. A lot of it sounds like it might be poorly remembered actual 1960s music, but it is all original. “All the diegetic music in-game was mostly composed by Ross Tregenza. I know there is a lot of diegetic music used in-game for various things like stereo systems, radios, interactive arcade games stations, jukeboxes, loudspeakers, a concert, parties and even on NPC’s. The audio director’s vision was to have the score have its own style to contrast against the diegetic music which was used to illustrate the party atmosphere. The effect really worked out well.”

Every score for film or videogames is the result of the composer’s vision working in tandem with that of the developers, and every project has both opportunities and challenges. For Deathloop, one of the problems to solve was creating unity out of the disparate musical elements that the producers had in mind. “A great deal of time and effort was spent on trying to create a unified musical identity for the score. As you mentioned, there are many styles that come into play in the score to Deathloop so finding a way to bring them all together in a way that felt cohesive was certainly a challenge.”

“Another big challenge was creating the main theme, which was the first thing I was working on back in January 2020 while still exploring musical approaches for the score. Michel originally imagined something very mysterious, almost like “Lost” meets “Mysterious Island” which, on the surface, makes a lot of sense based on the setting of Deathloop.  Michel approved the theme, and everyone was happy. But after spending a couple of months on the game, I got a better sense of the personality of the game and felt this mysterious theme wasn’t quite capturing the vivacious personality of the game. So, without telling Michel, I composed a new main theme and sent it to him explaining why I felt it could work better as the theme. He liked it very much but was understandably cautious in making any quick decisions. Afterall, it was already approved and familiar. We had some conversations and a few weeks later, Michel made his final decision and agreed that this would be a better main theme to use. Naturally, I was thrilled, and that new theme became the foundation for much of the entire score. I think that was an amazing move by Michel, and I give him tons of credit for having such an open mind.

While occasionally videogame soundtracks are released when the game is available, often there is a bit of a wait. “Although I was hoping for a complete OST release immediately, many of the tracks are available digitally in the deluxe edition. But stay tuned as I know Bethesda is planning on some cool stuff regarding the soundtrack.”

Dying Light 2’s Music is the Best of 2022… So Far
Next “Batman/Fortnite: Zero Point” is The Crossover Nobody Asked For, But Everyone Needs
Previous 3 Things I Love (and 3 Things I Don’t Love) About The Thrustmaster T.Flight Full Kit X