Welcome to COGconnected’s weekly indie roundup, where we recap some of the hottest indie news of the week! This week we saw a hotly anticipated title get the physical release treatment, a new title from a beloved studio, and a big update on a game that some of us have been looking forward to for a couple of years now. There’s some pretty exciting stuff in here, so let’s get started!

Upcoming soulslike indie title Mortal Shell is bringing its horrifying atmosphere to the physical realm this coming October 2nd. The team behind the game made the announcement on the official website, and the physical edition will be coming to PC, PS4, and Xbox One for $29.99 USD/$39.99 CAD/€34.99 / £29.99. It’s worth noting that the PC version will not actually contain a disc, and will instead contain a key that can be redeemed on the Epic Games store. It’ll also include “an exclusive fold-out poster and softback artbook, featuring never-before-seen concept images and character art,” all of which will also be included in the PS4 and Xbox One versions as well. The accompanying image showing the physical edition’s box art notes that the cover is not final, but personally, I think it looks pretty neat! The digital version of the game is set to drop this coming Tuesday, August 18th for the aforementioned platforms. 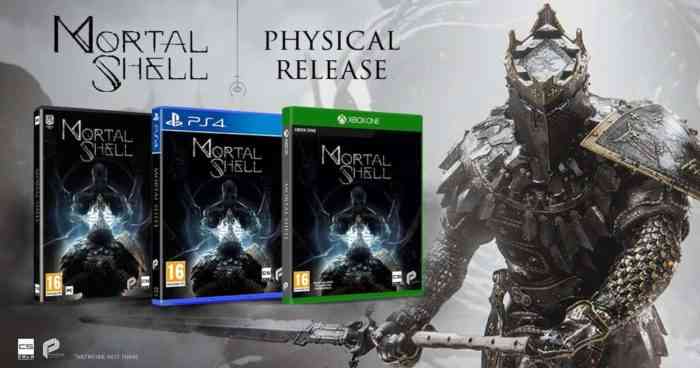 Night School Studios of Oxenfree and Afterparty fame released their latest title Next Stop: Nowhere on Apple Arcade this past Friday. In it, you’ll play as a courier named Becket who is tasked with helping a former bounty hunter named Serra find their son Eddie. The gameplay includes dialogue choices similar to past Night School Studios titles, as well as a “spaceship that comes fully equipped with his own personality.” Creative Director Sean Krankel tweeted out a shortlist of inspirations for the game when it launched yesterday, and a couple of them may surprise you:

inspirations include:
– Grosse Point Blank
– Pineapple Express
– the Millenium Falcon
– Designer Republic circa ‘96
– sticking your arm out the window on a road trip https://t.co/ZDMzyRgNjT

If you don’t have access to Apple Arcade and want to try it out – try not to fret. I personally would assume the game will make its way to other platforms sooner or later, the same way other iOS titles have in the past, including Apple Arcade launch title Oceanhorn 2.

Dead Cells developers Motion Twin and Evil Empire dropped a new update for the 2D soulslike cult-hit earlier this week titled “Barrels ‘O Fun.” The update adds a new biome named Derelict Distillery that hosts a plethora of explosive barrels, and 3 new achievements for players to unlock. It also comes with a new Barrel Launcher weapon, that does exactly what it says on the tin with a bang (Get it? Because they explode). The update also includes an 8-bit version of the game’s entire soundtrack, which can be enabled from the sound menu. The Barrels O’ Fun update is currently available for players on Steam but will be making its way to console versions at an undetermined date.

It’s been a while since we’ve gotten some substantial info from the folks at Mundfish on the hotly anticipated Atomic Heart aside from a 4K gameplay teaser back in March. This week the floodgates were opened to douse us with sweet, sweet details on how things are going with the title, and I’d say it’s all good news! Mundfish confirmed that the game will be coming to PS5 and Xbox Series X alongside the previously announced current-gen versions, and released a shiny new boss battle trailer that includes the first taste of a very industrial-sounding score from Doom (2016) and Doom Eternal composer Mick Gordon. The trailer also shows off quite a bit of gameplay and a mechanic that seems to let players track enemies through walls (similar to the listening mode in The Last of Us). The boss battle itself is against Plyush, which the developer described to IGN’s Ryan McCaffrey as “an organic enemy which might just be a product of some secret governmental deeds.” Personally, I think it looks like Bloodborne’s Blood Starved Beast, but less cute by like, a lot (super cuddly though!). Mundfish also mentioned to IGN that the game is primarily being developed as a next-gen title and that it “will have no loading screens due to [the] fast SSD.” Unfortunately, one thing they didn’t mention this week was a release date, so here’s hoping for one soon!

It’s a good week when a developer known for weird games announces a new weird game, and this was one of those weeks. Daniel Mullins Games has announced Inscryption, a new roguelike-deckbuilding-escape room-horror game that seems to somehow include even more genres and mechanics than that when you watch the trailer. The game is currently available to wishlist on Steam and is set to drop for PC in 2021 with “likely post-release console launch” according to the game’s press kit. There’s not much else known about the game for now, and it’s likely to stay that way until launch, which I personally will be eagerly anticipating – I love esoteric horror weirdness.

So what do you think? Will you be picking up a physical copy of Mortal Shell? Or jumping back into Dead Cells? And what do you think of Inscryption? Let us know in the comments, and be sure to keep it locked to COGconnected for all the latest indie and triple-A gaming news!

Dead Cells Announces Castlevania Crossover Coming 2023
Next Save the World With Morgana Cosplay From Spain
Previous Weathering the Storm: A Detailed Look at the Weather Systems in Microsoft Flight Simulator 2020