Battlefield 1 Getting A Thumbs Up, Infinite Warfare Dislikes Piling Up

This past week, reveal trailers for two of gaming’s hulking juggernauts – Call of Duty and Battlefield – hit the scene. While Infinity Ward continues its march towards the inevitable cyber-future with Call of Duty: Infinite Warfare, Dice is kicking is old school with Battlefield 1. What’s interesting here is that for the first time in many years, these two combatants have the opportunity to row their own boats. They won’t fill the same niche this holiday season, and people’s gut reactions on YouTube have been telling. In short, there are a lot of Infinite Warfare dislikes, and all that’s old is new again. 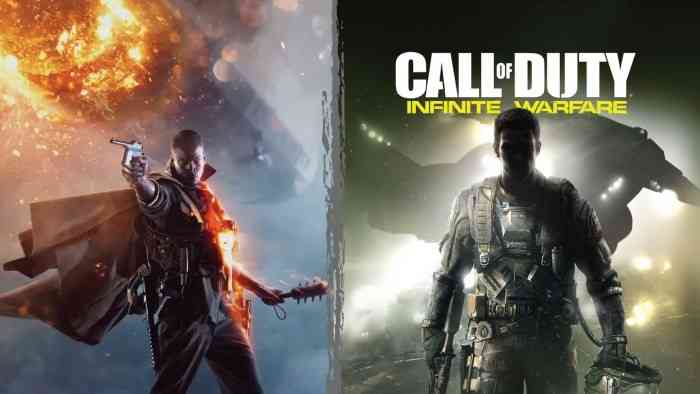 Infinite Warfare is Call of Duty… in SPAAAAAAACE! Infinity Ward’s last game – the much maligned Ghosts – hinted at where the series was headed, while Advanced Warfare and Black Ops III cemented the reality of the situation. According to YouTube reactions, staying the course may be the cement shoes on the Call of Duty franchise. As of this writing, the Infinite Warfare trailer has 237,758 likes, and 911,135 dislikes. That’s roughly 4x as many Infinite Warfare dislikes as likes. Certainly the cringe worthy title has something to do with that, but it seems gamers are finally fed up with the yearly rinse and repeat Call of Duty formula.

I have to agree. I was completely underwhelmed by Black Ops III, and as much as I like a good action set piece Infinite Warfare looks bored with itself. Generic soldiers, generic robots, and tropes that have been done a million times in a million series’. It’s still Call of Duty though – some of the most frantic and tightly balanced close quarters combat around – and will likely play great. We’re looking forward to seeing where they take things from here.

Battlefield 1 on the other hand, is exploring an era that’s been largely ignored by video games – World War 1. After Battlefield 4 and Hardline dabbled in the modern era sandbox with moderate success, they’re completely flipping the script. Biplanes, horses, trenches, mustard gas – all the things that made World War 1 such a nightmare for those who lived through it are finally getting a video game treatment. The historical setting is garnering massive support on Youtube. 843,713 likes, only 15,918 dislikes. That’s a whopping 53x as many likes as dislikes.

But will it work? I have no idea. If well implemented, Battlefield’s huge scale battles will work very nicely with the horrors of WWI. Let’s hope for fantastic dogfights, amazing naval battles, and grandiose battles of attrition. We’ll likely get our hands on Battlefield 1 at EA Play (the EA ‘we’re not doing E3’ thing happening during E3), so stay tuned for that!

What do you think readers? Is Call of Duty sounding its death knell? Do all the Infinite Warfare dislikes spell doom for the franchise? Likewise, is Battlefield biting off more than it can chew? Or will Battlefield 1 be the next truly great shooter? Let us know on Twitter or in the comments – we need to know!