This has been a stellar year for videogame music, and when Marvel’s Guardians of the Galaxy releases later this month, it’s a sure bet that the score and licensed songs will be a huge part of Square Enix’ epic story. I had a chance to talk with the game’s audio director, Steve Szczepkowski about all things Guardians and the kickass sound and music design of the game.

Fans of the comics know that player character Peter Quill takes his “Star-Lord” moniker from his favorite hard rock 80s band, so one of Szczepkowski’s first orders of business — well, more like an awesome side-project — was to record an album of originals by the fictitious rockers with Szczepkowski as the lead singer, channeling the vocal power of Van Halen and other 1970s and 80s metal bands. In addition to being commercially released along with the game, the album will be entirely playable in-game on a jukebox on the Milano, the Guardian’s ship, and prominently on Peter Quill’s omnipresent Walkman.

Of course, the main draw of the Guardians’ soundtrack has to be the dozens of licensed songs. The track list comes from an amazingly wide array of artists, all of whom licensed their original recordings (or remasters) for the game. The styles range from power pop and rock stalwarts like Mötley Crüe, Iron Maiden and Kiss to New Wave and top 40 bands like Flock of Seagulls, Culture Club and A-Ha and everything in between. Szczepkowski said that while there were a couple of songs they weren’t able to get, the vast majority of artists were excited to lend their music to the game. 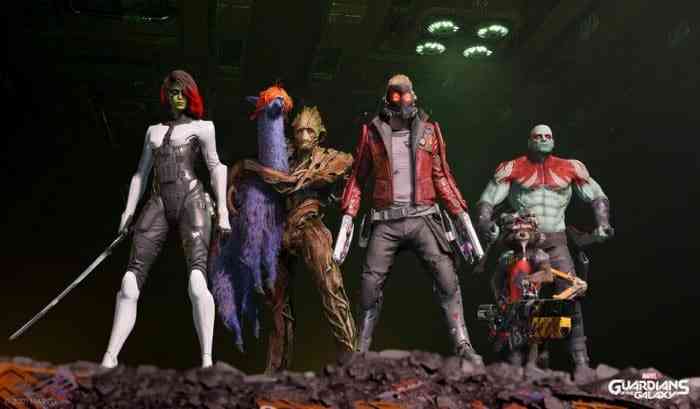 Even playing the demo a few weeks ago, I was struck by how important both the licensed music and original score were to the game, as they were to the live action films. The high energy arena pop and rock underscore the game’s battles like motivational music, and when Star-Lord pulls his team into a Huddle — a game mechanic that gives the Guardians added power in a fight — it starts and ends with music, with Peter even slyly referencing the lyrics (for anyone paying attention). Szczepkowski says that there are even some puzzles in the game that are music-based, and that most of the time, how songs appear in the game is randomized, so that when players have to retry a segment multiple times, they’ll hear different tracks. The film soundtracks were huge hits and it isn’t hard to imagine the same for the game’s licensed tracks.

That said, licensed music is only part of the story and Szczepkowski and I talked a lot about the game’s original score by Richard Jacques. Jacques was picked from a pool of talented composers that Szczepkowski auditioned for the job and one of the first pieces of music created was the Guardians theme, which brings to mind the experience of being bowled over by a big action-movie score played by an epic orchestra. Although the score has themes for several characters or events, Jacques and Szczepkowski decided to use the Guardians theme as a thread that ties everyone together, using variations of the material to create specific emotional beats. One of the reasons that the Guardians of the Galaxy’s score sounds so impressive is that it was recorded over a two week period by live orchestral musicians at Abbey Road studios. While of course some game scores use small groups of real players, the pandemic and tighter budgets often mean that digital samples replace living and breathing musicians.

In addition to the licensed and original music, sound design plays a major role in the effectiveness of any game. Environmental audio, weapon sounds and creature effects are all part of what an audio design team is responsible for. Szczepkowski said that the game’s aliens not only had well-constructed languages but they were voiced by the company Fabrique de Monstres, a stable of heavy-metal virtuoso screamers who specialize in using their vocal instruments in creative ways.

I was impressed by the demo of Guardians and a big part of that came from the exciting and creative use of licensed and original music. Between Szczepkowski’s Star-Lord band, the huge number of 80s tracks and Richard Jacques score, players have a sonic treat in store come October 26 when the game releases. Look for a review here on COGconnected.

Marvelous Tactical Gameplay in Marvel’s Midnight Suns
Next This $300 Bloodborne Watch is Elegant and an Absolute Stunner
Previous The OLED Nintendo Switch Is Fantastic But Do You Really Need It?