Welcome to fourth and final part of The RetroReview Series’ debut article, covering Final Fantasy VII. If you’re just jumping in now you might want to start at the beginning with ‘The Intro‘, ‘The History‘ and ‘The Review‘.

When reviewing a game that I have tons of nostalgic love for, it’s hard to not accuse myself of having some kind of bias. This is the game that got me seriously playing video games. This is my favorite story. This is my favorite musical composition. This was the first RPG that I beat. It’s great, but am I blinded? I don’t think so. I really think this game is on another level. There are lots of games I love, but nothing like this. I admit that if I was a lot younger, and hadn’t played videogames until today, it might be harder to forgive things like dated graphics, and traditional combat, but I recommend this game to people all the time, and they love it. The two people I know who have played this game for the first time recently, both love it. They both consider it one of their very favorite games of all time. This game is still extremely playable today, and its historic value is immense. 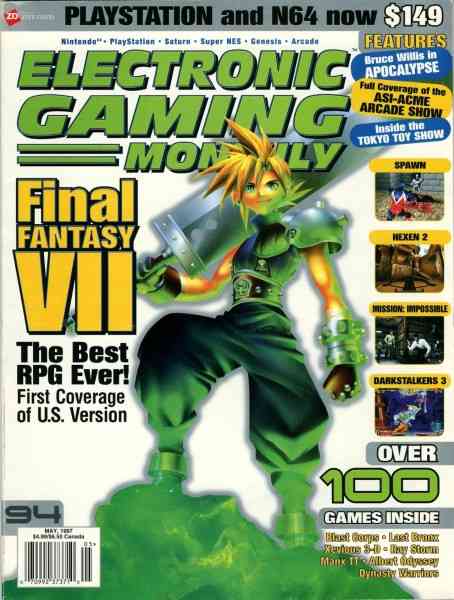 The game has sold just over 11 million copies, making it the 10th highest selling video game of all time, up until the end of its console generation. It’s spawned one direct sequel film called “Final Fantasy VII: Advent Children”, an anime film prequel called “Last Order”, a third person shooter sequel, about the character Vincent, called Dirge Of Cerberus, a PSP action RPG prequel called Crisis Core, and a mobile phone prequel called Before Crisis. It was ported to the PC, and can currently be found on the PSN as a PSOne Classic. So the only risk in trying this game is $10. Pay $10 and it’s yours to play, forever! Sometimes it’s only $6! And really if someone passionately told me that anything was their favorite game, movie, album, book, whatever… I’d check it out.

If you would like to get a physical copy of the game, for PS1, it’s pretty easy to find. Two of my favorite online sources are eBay and lukiegames.com. When shopping for retro games in the greater Vancouver area (unlikely, I know but just in case!), I usually go to Press Start, and GameDeals in New Westminster, then Mostly Music in Port Coquitlam (worst pricing, but incredible selection). So I hope that if you’ve got a PS1, PS2, PS3, or PS4, and have any kind of love for JRPGs, that you do yourself the treat of getting Final Fantasy VII, my favorite videogame of all time.

Oh wait! I’d be totally foolish to end this retrospective without talking about the upcoming remake! At E3 2015, Square-Enix announced that they were going to remake Final Fantasy VII for the PS4! Before we go any further here you need to do yourself a favour and check out this teaser:

This is something that’s been requested by fans for a long time, and teased by Square as not happening, but then they do things like release spin-off games and movies, and make graphics showcases with Final Fantasy VII characters. Well it’s not a joke; it’s actually happening. The remake is likely a ways off. I’m going to predict late 2018 in Japan. It’s a high budget remake, and really all that’s been said is that the story and combat will be altered, Advent Children will be the character design basis, and that Tetsuya Nomura will be directing. He’s also working on Kingdom Hearts III right now, and that project’s release date is likely first priority (and also likely a ways off).

Anyhow, stayed tuned to COGconnected for more of The RetroReview Series in months to come. I’m not gonna reveal what next month’s game will be, so be sure to check in next week to find out! Please share your thoughts, and check out my future reviews for PS4, Wii U, and 3DS, found right here, on COGconnected.