Can Xbox Fix Their Japan Problem? It’s Possible They Have Already

It’s no secret to the gaming community that within Japan and the larger Asian market, Xbox has not had a taste of the success they have achieved elsewhere. While Xbox has struggled in the last decade compared to its performance with the Xbox 360 release in the late 2000s, the consoles still command a respectable market share within the US. However, when examining sales data in Japan, it’s clear that Xbox is still struggling to find its way from shelves to households beyond those bought by niche collectors and enthusiasts. The “why” and “how” of Microsoft’s struggles are slightly complex, and their strategy should be moving forward, even more so.

Before the release of the Xbox, Microsoft tried to display its commitment to the Japanese gaming market by flying in the big man himself, Mr. Bill Gates. Coming hot off the massive success of Windows in the ’90s, the strategy of putting Gates face behind major promotional events for the Xbox in Japan, was in theory, a great idea. Unfortunately, all the hype and press a Fortune 500 company could muster didn’t quite cut it. Poor press conferencing and awkward marketing campaigns (such as Bill Gates holding a cheeseburger with hands that are very much not Bill Gates’) dug Microsoft a bigger hole than they were in. 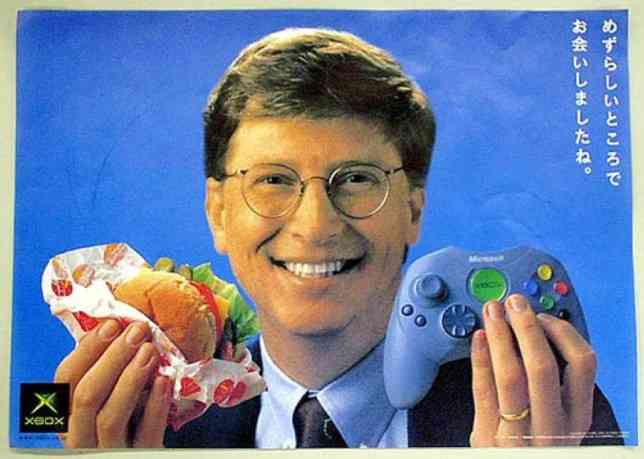 Releasing already behind the PS2 and the Gamecube, Microsoft was reeling from negative PR centered around the size of the notoriously bulky controller and their aggressive foreign marketing strategies. Additionally, Microsoft was essentially stepping into the role of the 3rd player in the console industry behind Sony and Nintendo. This spot was formerly held by SEGA, which led to a collaboration between the two companies. Despite scoring 11 SEGA exclusive titles for the original Xbox, such as Panzer Dragoon Orta and the beloved Jet Set Radio Future, Xbox couldn’t shake their close connection to PC Gaming, which was not popular among Japanese gamers at the time.

SEGA’s exit from the hardware market, in theory, would have been a perfect opportunity for Microsoft to fill the void, but unfortunately for Xbox, this allowed Sony to grow exponentially while leaving Xbox sales at a minimum. However, to their credit, the American giant continued on and began to find their best success in the performance of the Xbox 360.

Although they continued to release titles marketed to the Japanese during the 7th gen, such as Blue Dragon and Lost Odyssey, internal motivation for chasing the Eastern market began to dwindle, according to former executive Ed Fries. The continued reputation of the Xbox 360 as the “Shooter Box” resulted in many disinterested gamers looking for a plethora of JRPG’s that Sony had almost monopolized.

While the 360 saw respectable, albeit non-competitive, sales in Japan, the launch of Xbox One neutered any momentum going forward. Already alienated for being too “American,” Don Mattrick and his focus on the Xbox as an entertainment hub that was forcibly bundled with the Kinect had virtually no resonation with Japanese gamers. Additionally, the only major Japanese title slated for exclusivity on the Xbox One, Hideki Kamiya’s Scalebound, was inevitably canceled, to many gamers’ (including this author’s) disappointment.

As Xbox neared the brink of the death of its brand, Phil Spencer has spent the last half of the decade rebuilding gamers’ trust and the Xbox’s credibility. However, during these years, the Japanese market has fallen further away, but with the release of the Series X|S and the success of GamePass, Xboxes might begin to find their way into Japanese homes soon.

With Xbox firmly re-securing a seat at the table in Western markets, all eyes have turned to Japan for Xbox’s future. With the troubles that have plagued Xbox overseas in the past, is recovery even possible? Within one year of launch, the Xbox Series S|X has out-paced Xbox One sales 4 to 1, nearly surpassing the previous generation in total sales already . Although it has only sold 1/10th of what the PS5 has, market growth is market growth, and while Xbox may never reach the likes of Sony or Nintendo in Japan, that doesn’t mean it can’t find success there.

The Xbox Series S is a great entry point for foreign markets with a budget-friendly price-point and a compact design. Paired with GamePass, Japanese consumers have a low-barrier console to satisfy any palettes curious for Western releases. However, the issue remains that Xbox simply does not have many Japanese exclusives to compete with Sony. With the recent acquisition of Bethesda, and by proxy Tango Gameworks, Xbox now has at least one Japanese developer under their umbrella, but it will be a long time before we see an exclusive from them. Tango Gameworks’ Ghost Wire Tokyo will, like Deathloop, be honoring prior release commitments so that gamers will be seeing it on PS5 before Xbox.

With the prior lousy press and the unmitigated success of Sony, Microsoft working out third-party exclusive deals with Japanese developers is unlikely to happen frequently. Even with the amount of funding Xbox has behind it, throwing money at Japanese developers does not build goodwill, according to former Xbox director of 3rd-party relations Kevin Baccus. Based on an interview given with Eurogamer in 2012, Baccus said that any deals struck with Japanese developers need to be done through intensive relationship building, which will require a very long time for Microsoft, who essentially abandoned the market altogether.

Many Xbox fans want to see Microsoft make a Bethesda-sized purchase overseas. Publishers with somewhat stagnating releases like SEGA or Konami or the rumored favorites, but this may be a poor strategy choice based on what we know. With Xbox’s marketing campaign being considered too aggressive and “American” for the original Xbox to receive support, outright buying a foreign studio may be in bad taste. To garner Japanese support and trust, Microsoft seemingly needs to walk a fragile line between relationship building and financial support.

GamePass is one service that can be used to maneuver this tricky environment. Securing Asian games release day-and-date on GamePass allows developers freedom of development. It establishes a positive relationship while simultaneously incentivizing Japanese gamers to dip their toes into GamePass, which exposes them to Western titles. While the exclusivity problem remains, Japanese gamers may recognize the value proposition found in the service. This strategy is straightforward and ensures Microsoft is not seen as the aggressor.

While many Xbox subsidiaries were bought outright, a handful of studios built from the ground up to develop Xbox flagship titles such as 343i, The Coalition, Turn 10, Playground Games, and The Initiative. With a proper strategy created by those familiar with the market, Microsoft could prove its commitment to Japanese gamers by building a studio or two that is native to Japan. The feasibility of this is questionable, and the risk is significant, but it acts as a face-saving half-step between buying a studio out and gaining third-party exclusivity.

The unfortunate fact of the matter is that even if Xbox makes every right decision, it’s still inevitably an uphill battle that will never stop. For foreign companies in Japan, patience and adaptability are vital. Phil Spencer has done a great job resurrecting the Xbox brand in America and Europe, but becoming successful in the land of the rising sun is a whole different beast. The positive side is that Xbox doesn’t need to try and match Sony and Nintendo’s success in Japan; that would be foolish, but instead, all it needs to do is find a reliable consumer base and, most importantly, listen to their needs and wants. Can Xbox fix its Japan problem? Maybe not, but it can undoubtedly grow its market share, one gamer at a time.

Destiny 2 Has Some Big Changes for Iron Banner in Season 18
Next Top 5 Spooky 2021 Video Games To Play This Halloween
Previous Head to Head: Marvel’s Guardians of the Galaxy vs. Age of Empires IV