The 3 Best (and 3 Worst) Things About Grounded

Grounded is the brand new game from Obsidian Entertainment, a company known from some pretty amazing games such as The Outer Worlds and Pillars of Eternity. Obsidian Entertainment was one of the studios that was acquired by Xbox Game Studios in 2018, and Grounded is their first Xbox/PC exclusive out of the acquisition. While I was initially skeptical of Grounded, I can honestly say I’ve been pleasantly surprised with the end result. Grounded is an adventure featuring four teenagers who have been miniaturized and stranded in their backyard. They’ll have to make use of the various resources they can scavenge to survive. Here are the three best and three worst features based on my playtime with Grounded.

The 3 Best Things About Grounded

Right out the gate, Grounded is available for everyone who subscribes to Xbox Game Pass. If you fall into that category, stop reading and go click install, you can finish reading this while it downloads. While it’s still considered “Early Access”, the game is in a fully playable state with plenty of content to enjoy. But wait, there’s more! The game also features four player online co-op and is crossplay compatible, allowing you to survive the wild backyard with your three closest friends. However, it is worth noting that the game does not feature any local co-op.

One of the first things that’ll blow your mind when booting up Grounded is the sheer sense of scale. Yes, the concept of being miniaturized has been done before – but not to this extent. Visually, all the elements fit together brilliantly. You’ll see lush grass, beautiful flowers, and plenty of bugs. Occasionally, you’ll come across objects strewn throughout the yard. Sure, the objects are generally quite mundane – but when you first see them, it’s really quite neat. Who would have thought a juice box would be an impressive sight? The environment goes beyond the explorable areas as well. On one end of the yard is a large house that just kind of looms there – I wonder if we’ll ever get the opportunity to actually explore it. 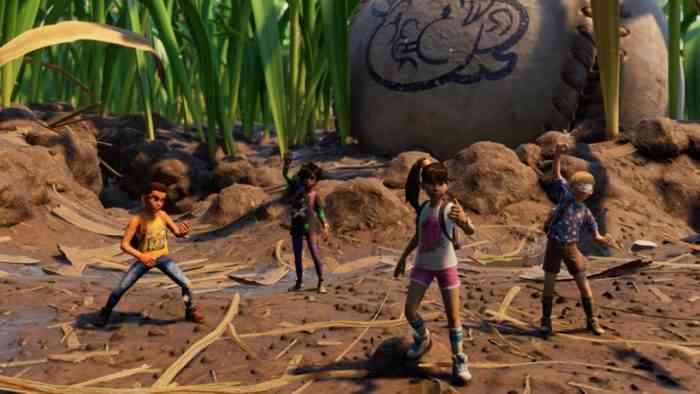 Grounded features a pretty robust crafting system, allowing players to craft various weapons, armor and shelters using stuff salvaged throughout the backyard such as grass, weeds, and pebbles. The amount of craftable items is no where near what you might find in a game like Minecraft, but Minecraft has also been around for ages and continues to add new content. It’s possible to build pretty complex shelters in Grounded, but resource management is a lot more, well, grounded. In Minecraft, you can hold dozens and dozens of resources, in Grounded, the approach is much more realistic. Still, despite the limitations, I’m sure we’ll start seeing some impressive buildings pop up – who knows what a team of four like-minded individuals could put together if they put the time in.

Head over to PAGE 2 for the worst things…