Ranking All 8 Ys Games From Worst to First

Ranking All Eight Games in the Ys Series

February 2nd has come and gone, and that means my most anticipated game of 2021 has arrived! Ys IX: Monstrum Nox for the PS4 is in digital stores, and physical copies are in the mail! And I’m not exaggerating; Ys is one of my favorite videogame series of all time, and if you feel like you need some convincing to try the series out, this is likely the article for you. I’ll be giving you the kind of information you can’t get from reading Wikipedia articles on the games, and ranking them in order of my love for them. The release and number of games may seem kind of daunting, but rest assured that like Final Fantasy, The Legend of Zelda, or many other great action JRPG series, the Ys games can be played in any order. I played them in order of release, but you can start at the top of this list. For now, I’m starting at the bottom: 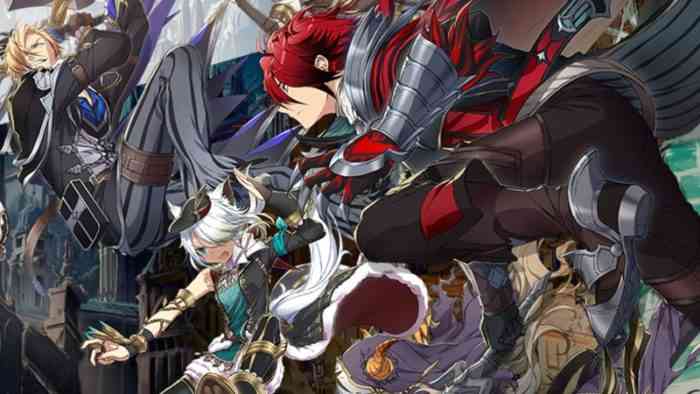 This opinion, of Ys V being the worst in the series, is not an uncommon one amongst Ys fans. But even though it’s my least favorite in the series, I still love it. The gameplay is a departure from the original Ys combat system. This is the closest Ys ever gets to a full-on Legend of Zelda-style action RPG, with a top down point-of-view, and real time combat involving sword swinging, and shield blocking. And unlike Link, Adol, the series protagonist, can jump!

There’s really nothing to complain about with Ys V. It’s just that the story is probably the least memorable in the series. It’s completely self-contained, even though all the games star the same character and take place in the same world. There’s no prior knowledge of other Ys games needed (and I’m the kind of person who has to play series in order of release). 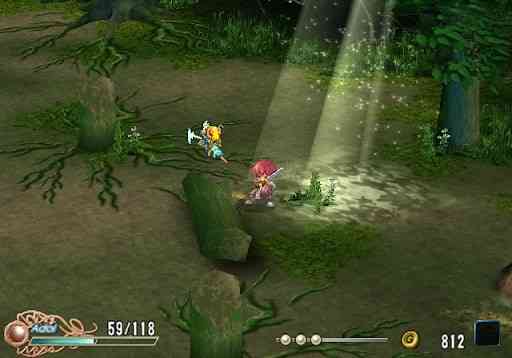 Whether or not Ys Origin is a mainline game in the series is debatable, but I’m including it in this article because more information is probably better than less information in this case. The reason I say there are eight main series games, and include Origin, even though it’s not numbered, is because Ys I and II have mostly been released as a single game, and I will rank it as such.

Ys Origin has a very stripped-down structure compared to other games in the series, because it doesn’t involve exploration of a geographical region, but rather a large tower. It only takes about twelve hours to beat, but the game starts with two selectable characters, each with their own unique story. And if the game is beaten with both, a third character becomes selectable. It is the only game in the series that doesn’t star Adol, the Ys series protagonist. Ys Origin is one of the modern-style Ys games, which began with Ys VI, that features 3D real-time combat. My only complaint is that it feels more of a micro game, and lacks the sense of world discovery the other series titles excel at providing.

Ys Origins is very easy to play right now, as it is available digitally on PS4, Switch, Xbox One, PC, and Vita. It can be bought physically for PS4 and Switch from Limited Run (aka eBay), and a second physical release can currently be preordered from Strictly Limited Games.

It’s one of the post-Ys VI 3D action titles, and as much as I like them, I prefer the 2D styles of olde or the fully 3D style of VIII. It’s an excellent game, and it’s a must play for fans of Oath Of Felghana, Memories Of Celceta, or Origin.

Probably my biggest complaint about Ys Seven, is that it can only be played on PSP or PC, and neither of those are platforms of choice for me. I find RPGs to be too long for me to enjoy on handhelds, and I hate all the issues PC games can have. In Ys Seven’s case it won’t go full screen for lots of users, and others, like me, have a zoomed in picture that doesn’t seem to be fixable. 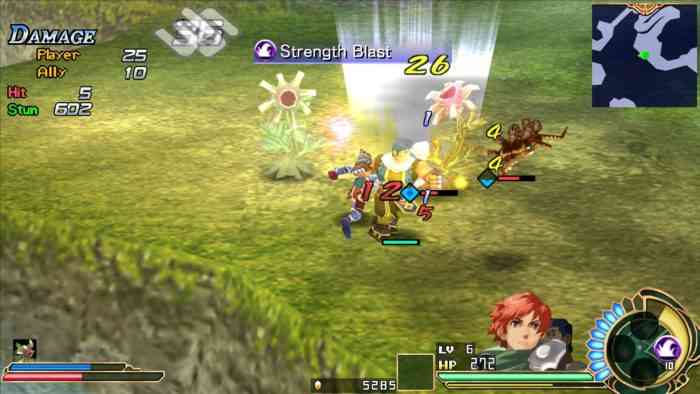 Really the next four games could change in order on any given day for me. They’re all so fantastic, and among my favorite games of all time.

Ys VI is the first of the modern era of Ys games that is continued with Oath in Felghana, Ys Seven, Memories of Celceta, and Origin, and I think it’s the one that does it best. Exploring the island where Adol washes up is truly a delight, and the game has an excellent balance of combat, exploration, town visiting, secret discovering, etc. The other games of this style never really strike the balance that Ys VI has, and can often involve more grinding or talking to townsfolk than I would prefer. Ys VI just keeps moving along at a great pace.

Ys VI was a big deal because it was the first English language release in the series since Ys III. It was first released in North America for the PS2, then a year later on the PSP, then nine years later for PC. I played it on PS2 and that’s still my preferred version to play.

Ys III was the first of three Ys games released on the Super Famicom, and was the only one of those three to make it to North America. It’s often considered a bit of a black sheep in the series, but I love it. The first time I played it I got to the final boss in a single sitting, then struggled with that boss for days.

Ys III was a major departure from I and II. It was a side scrolling action-adventure game with mild RPG elements, similar to The Legend Of Zelda II or Castlevania II. It is known for its high difficulty, but I honestly didn’t have any problems the first time I played it. It requires a bit of front-loaded grinding, but that shouldn’t be anything new to anyone who’s played early Dragon Quest titles.

It was remade as Ys: Oath in Felghana for the PSP, and then eventually PC. This version is drastically different from the original, and while I loved the way it fleshed out the story, I prefer the gameplay of the original. Fans of Ys VI, Seven, Memories of Celceta, and Origin will love it, and will find its gameplay very familiar. 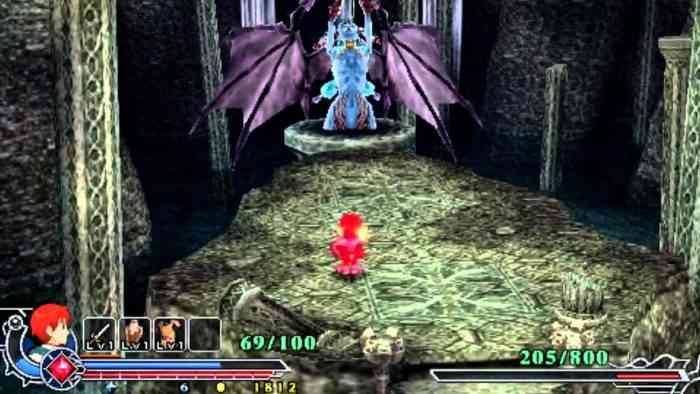 Now we are getting into the old school-style of Ys games. Ys III was a side-scrolling departure, but Ys IV was a return to form for the series.

Ys IV is a top-down action RPG that involves the player strategically running into their opponents. It’s hard to describe because there really are no other games that attempt this combat system. Enemies have to be run into from the side or behind, and the player takes damage when directly attacking. I love this style of gameplay, as the games that have it rank higher on my list.

Ys IV had a bizarre release. There were actually two games released under the title “Ys IV”: Mask of The Sun for the Super Famicom and The Dawn of Ys for the PC Engine (known as the TurboGrafx-16 in North America). Neither version was released outside of Japan, and I’ve only played the Super Famicom game, in the form of a reproduction cartridge for my Super Nintendo. There was a remake of both games that combined them into one story called Ys: Memories of Celceta, originally for the Vita, and later released for the PC and PS4. It has the same 3D gameplay as Ys VI, Ys: Oath in Felghana, Ys Seven, and Ys Origin. My high ranking of Ys IV is based on my love for the Super Famicom version.

This is the game that started it all! Originally released as two separate games for various computers in Japan, it has since been combined with Ys II and presented as one game.

This is maybe the one game that players might want to try first, before playing any of the others, at least if they want to know why the series is called “Ys” and not “The Adventures of Adol” or something like that. It has the same top-down “run into your enemies” action RPG gameplay of Ys IV. The game has a perfect length and structure, and is the start of many of the tropes the series is known for, such as healing by standing still outside, a ton of the screen being taken up by borders, seriously amazing music, etc.

I first played Ys: Ancient Ys Vanished for the Famicom (Japanese NES) on a reproduction cartridge. It was basically unplayable, and changed all of the images/cutscenes into generic Western medieval ones. There was a Sega Master System version released in North America, which I haven’t played, as well as Apple and DOS versions. But THE version to play is Ys Book I & II for the TurboGrafx-16 TurboDuo. For those of us that never owned a TurboDuo, there was a release on the Wii Virtual Console, and a release as a part of the TurboGrafx Mini. This version features anime art and cutscenes, an awesome redone score, and actual balanced gameplay. If you didn’t get it for the Wii and don’t want to shell out the money for a TruboGrafx-16 Mini, there was another remake for the PSP and PC which is quite good, but changes the graphics and lacks the anime charm of the TurboDuo version. The PSP/ PC game comes with a 2D version of the game as well as a 3D one, in the style of Ys VI. And, finally, there was a DS version, that is different from all the others, but I haven’t played it, and the internet says it’s pretty bad in comparison. 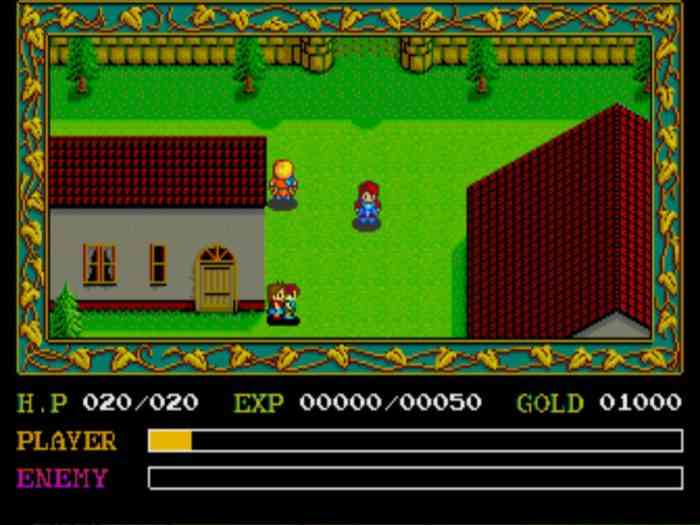 And after all my years of Ys love, there was another change in style, and little did I think it would become my favorite game in the series.

Ys VIII: Lacrimosa of Dana is a fully 3D action RPG that throws away the fixed camera views of the Ys VI-style games, and gives the player a modern look and camera controls. In this game, Adol is shipwrecked on an island, and has to gather castaways to build a makeshift village, and eventually escape the island. Some of the castaways act as party members, while others become parts of the village, like blacksmiths or farmers. It has a very satisfying Suikoden-style of fortress creation that makes finding castaways exciting and satisfying. And the more castaways Adol finds, the greater his strength-of-numbers, and the more island he can explore. It’s a wonderful formula that feeds gameplay hunger in the way Borderlands looting or Hades upgrading does.

Ys VIII was originally released for the Vita, but saw much wider success later on the PS4, Switch, and PC. It is so far the only game of its style in the series, and the latest game, Ys IX: Monstrum Nox, is going to continue that style, this time as a full PS4 release from the get-go. Do yourself a favor and PLAY THIS GAME!

Do you agree with our ranking of the Ys games? Which one is your favorite? Let us know in the comments below or on Facebook or Twitter. For more Ys IX: Monstrum Nox coverage, keep it locked to COGconnected.