Rock Band 4 Has Been a Let Down, This Is What We Need From The Rock Band 4 Fall Update

We need a Rock Band 4 fall update in the worst way as it has been a rough year for Rock Band 4 fans. The game shipped with half of the features of the last generation, DLC has been mostly pop oriented (over 60% of DLC releases to date), DLC entitlements still aren’t fully available and numerous bugs still haven’t been addressed. Going into PAX East 2016, Harmonix promised some big announcements, but most fans didn’t have much faith that they would amount to much.

As a 9 year Rock Band veteran, I have always learned to keep my expectations in check. I remember back in 2011, Harmonix announced that the most requested song in the history of Rock Band would be making its way to the DLC music store. Of course the twits hit the fan and people speculated Led Zepplin, Pink Floyd, Beatles, Rolling Stones would be coming and…….we ended up getting Never Gonna Give You Up By Rick Astley. Rick rolled…. Well played Harmonix.

It started Friday with an announcement that two characters from Gearbox’s upcoming game Bloodborne would show up the Rock Band 4 fall update. Harmonix assured fans that this wasn’t the big announcement they had teased previously. What else could Harmonix announce I thought? Guns N’ Roses DLC? It made perfect sense! The band has now partially reunited and many of the licensing issues that have stopped their songs from legally making their way into music games should be gone.  Hell, we had that cover band Axl has been playing with for the past 16 years release Chinese Democracy in its entirety on Rock Band back in 2009. Axl obviously has an established relationship with Harmonix so it’s just a matter of asking nicely. Right?

Sunday afternoon rolls around and Harmonix hosted a PAX Panel where they delivered one mind blowing announcement after the other. Online play, ion and midi drum support for the Xbox One, huge fall update, improved song sorting, Practice Mode, 2x bass support and more updates coming in 2017! On top of that, new guitars and drums from PDP will be debuting this fall as well.

With Harmonix’s big announcements this past weekend, I wanted to highlight what I want to see from the Rock Band 4 fall update.

This was my number one feature I’ve wanted since launch. It’s hard to believe in 2016, a game like Rock Band 4 didn’t launch with online play. My personal friends have moved on from Rock Band and don’t consider it “cool anymore”, so online play is a great option for those who don’t have anyone to play locally with. I think the reason Rock Band’s online play was not popular was because it was a mess. Lots of people online didn’t own DLC, in-game communication was poor and simply put, their was no structure. I am so glad this will be included in the Rock Band 4 fall update.

Harmonix is looking to improve the online play experience (coming this holiday season). Harmonix has been quiet on details, but they have confirmed that score duel will not be returning and their main focus will be on streamlining the quickplay experience between players who have mismatched DLC libraries. My biggest frustration with past online modes was that half of the players online didn’t even have DLC or if they did, it would be a handful of Avenged Sevenfold songs. Harmonix hopefully addresses this and improves the matchmaking in Rock Band 4. On top of that, I’d love to see some cross platform online play given that a lot of my friends play on the Xbox One.

One of the worst parts of playing with online in past Rock Band games is that you couldn’t control who would get to pick songs. One player could add as many songs as they wish and create an unbalanced setlist. Having the host control how many songs players can add to a setlist would be a much welcomed feature. 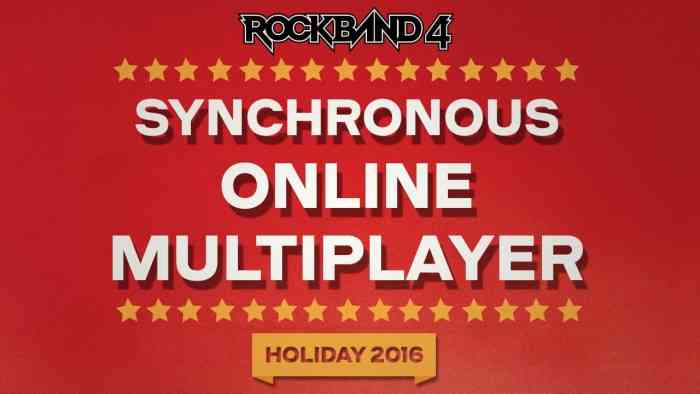 One big issue I had with Rock Band 3 was playing with people who had much different DLC libraries than myself. It would be great if at least half of your band owned a particular DLC song that maybe your whole band could still play it. If they don’t go this route, it would be great if Harmonix removed the uncommon songs from all players setlist so we don’t have to scroll through a sea of songs. It would also be nice if the game showed each player’s “favourite songs” at the top of the song selection screen so you could see what types of music your bandmates favour.

One feature that was in Guitar Hero Live I’d love to see in Rock Band 4 is a levelling system. Based on your skill level and how much you play, you rank up, earn items, get new perks, etc. It would also serve as a good indication of how skilled the people you are playing with are.

Another gripe I had with past online modes was the in-game communication. You could chat with another person provided they had a microphone, but the chances of a non-vocalist having a microphone was slim. Rock Band desperately needs an in-game chat menu. In the days of Rock Band 1, 2 and 3 on the PS3 I was forced to go to the Playstation home screen and send private messages back and forth with my friends. It was a nightmare to communicate with people who weren’t on my friends list.

I was a huge fan of Rock Band Blitz when it launched back in the fall of 2012. I’d love to see Blitz return as a game mode within Rock Band 4. It would offer a nice break from actually playing an instrument.  My only suggestions for improving the Rock Band Blitz experience is to make it more multiplayer friendly and remove the need to be online in order to use the in-game powerups.

Click PAGE 2 for the remaining ways the Rock Band 4 Fall Update can save the franchise.