7 Reasons to Get Excited for Black Desert Online, A Gorgeous Open World MMORPG

Unless you’re a MMO connoisseur like myself, you’ve probably not even heard about the upcoming Black Desert Online MMORPG slated to release hopefully early 2016. So what is Black Desert Online and what makes it stand out against the plethora of competition?

Black Desert Online is an open world sandbox MMORPG created by Korean developer Pearl Abyss and is finally making it’s way to North American shores after already being in open beta in Korea, Japan, and Russia for awhile now. Overseas it will be F2P (free to play), but here and Europe it is slated for a B2P (buy to play) release instead, both with an in-game cash shop with cosmetic and convenience items.

Hold on, I can hear the rolling of your eyes already. There are some really interesting design decisions that I think will make Black Desert stand out among the competition. Only time will tell if it’s successful, but here’s a few reasons I’m excited for the upcoming release after a few dozen hours with the first closed beta.

If I had to choose one MMO to best describe Black Desert’s combat, it would have to be somewhat close to Tera. Gone is the traditional tab-targeting with auto attacks; instead combat success and failure is based on player skill. This means you’ll need to manually face and follow your targets while also keeping in mind your position in relation to the enemies. Combat flows together very well once you’ve unlocked some abilities and you’ll start to do an immense amount of damage once you realize that positioning like back and side attacks add combat bonuses as well. The classes differ greatly in their attacks and strategy, so you’ll likely find a class that suits your preferred playstyle with some experimentation.

Sure, any game can boast about its graphics, but Black Desert is absolutely gorgeous; not something commonly said about MMO’s. From the moment you create your first character this becomes apparent right away. Character creation is very expansive and gives you the tools to recreate almost anyone, real or not so much, that you desire. I’ve actually seen some threads online with people sharing their best real life recreations for everyone to see. I probably spend about an hour or so creating my first character, making him as close as I possibly could to look like my virtual self. While there may not be a massive amount of default options, the true customization comes in once you play around with the sliders and see the changes that occur when doing so. 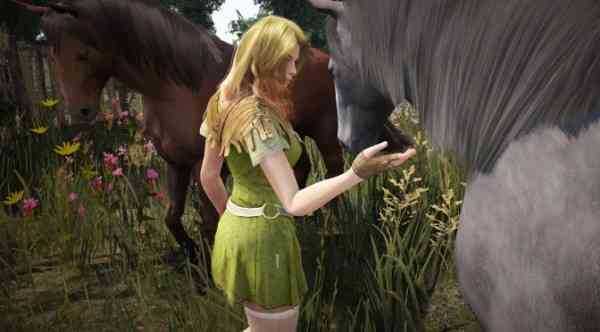 If you played ArcheAge you know exactly what I’m talking about. So why would I put a ‘restricting’ mechanic on this list? Well, for one it’s nowhere near as harsh as ArcheAge was, and second, there’s one very good reason why it’s on this list which I’ll get into shortly. To do many actions in game you need labor, such as gathering, opening specific dialogue with NPC’s, and more. Your labor regenerates automatically at a rate of 1 per 3 minutes and get some as a reward from certain quests as well. There is a max amount of labor you can pool, and this can be expanded on, but it’s much more forgiving than other games and I never really felt too hindered because of it for the most part.

So the main reason why this odd mechanic is on this list? You need to use labor to use global chat. Yup. Not local, guild, and private, simply global chat. You know, the chat you usually end up blocking and ignoring because of gold sellers and annoying people anyways? Each chat in global requires an energy use and even though it was only a closed beta, I really didn’t see all that much spam and annoying people using global chat, possibly because of this implementation. Sure it might suck if you’re really just wanting to ask a question to everyone and are out of energy, but worst case you’ll simply have to wait 3 minutes for an energy to regenerate before doing so.

Click on through to page 2 for the next 4 reasons why you should be excited for Black Desert.