Back 4 Blood DLC, Children of The Worm, Unveils Trailer

Prepare yourself cleaner, something dangerous is on the horizon. This time it’s more than just Ridden you have to worry about. Today Turtle Rock Studios is happy to unveil the new trailer for the second DLC for their co-op zombie shooter Back 4 Blood: Children of the Worm. A press release provides some more info about the DLC. Of course, the trailer gives players a look at exactly what they can expect from expansion 2. 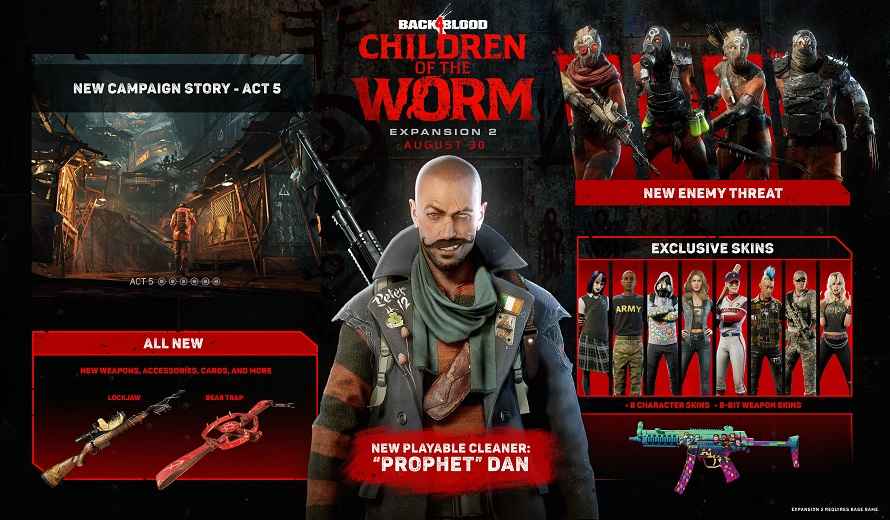 Back 4 Blood: Children of The Worm see players face off against, perhaps, their strangest threat yet. The DLC introduces the cleaners to a fanatic and deranged cult who worship the Ridden Devil Worm. They believe strongly in the rise of the Ridden and that humans should be done away with. Of course, you disagree. The DLC features all new story campaign elements, a new Cleaner as well as multiple exclusive skins for characters and weapons. Furthermore, the DLC comes with new weapons, accessories, and cards.

The Cleaner coming with Children of the Worm is “Prophet” Dan. This Cleaner is a gun wielding self-proclaimed, preacher of the end of the world. Yet, however crazy he may be, he brings some vital support to a team. With the ability to revive fallen comrades he gives embattled teams a chance at recovery. Players can get a glimpse of Prophet Dan as well as what else they can expect from the DLC in the new trailer.