WayForward always has stylish and inspired games coming from their studio. They are the team behind the Shantae and River City Girls franchises and many licensed games of the 2000s. They also came out with a game called Spidersaurs for Apple Arcade in 2019, which is now coming to PC and consoles.

It doesn’t take too many mental leaps to realize that Spidersaurs are a mixture of spiders and dinosaurs. In this game, splicing the two species was thought to be the answer to solving Earth’s existential crises. However, just like any story that involves bringing back dinosaurs or dealing with spiders in any way, things turned bad. 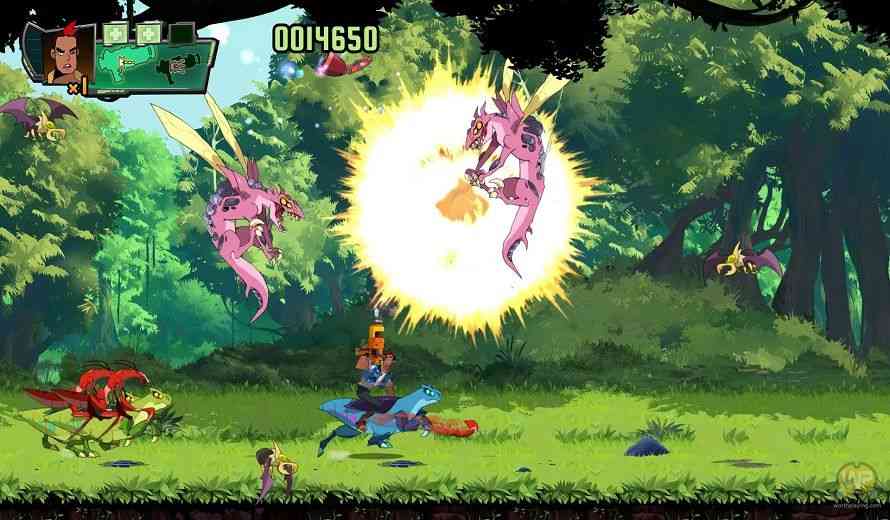 You play as either Victoria or Adrian. Victoria wields a guitar and Adrian fires a baseball launcher. Both weapons have different modes of firing, depending on what you need at the time. There are rapid-fire and steady-streaming beams, and can be shot in horizontal, vertical, and diagonal angles.

The gameplay mixes platforming, side-scrolling, and run ‘n gun elements familiar in other WayForward titles. The trailer has a sweet theme song that harkens back to the days of Saturday morning cartoons of the 1980s.

Spidersaurs is already available on Apple Arcade, but will be coming to PC, PS4, PS5, Xbox One, Xbox Series X|S, and Nintendo Switch sometime this Spring.

Are you going to check out Spidersaurs? Let us know in the comments below.