A New Enemy Lies in the Forbidden West

First appearing at this year’s Game Awards, the newest enemy added in Horizon: Forbidden West had yet to receive a formal introduction to gamers at large. But that changed today. GameInformer got a sneak preview – which of course, means that we get to revel in all the juicy info.

This Slitherfang is anything but subtle. With wide sweeping attacks and plenty of destructive attacks at its disposal, it’ll demand focus and quick-thinking in order to take down. It’s something straight out of Monster Hunter (seriously, I’m getting major Najarala vibes just looking at this thing), for all the right reasons. 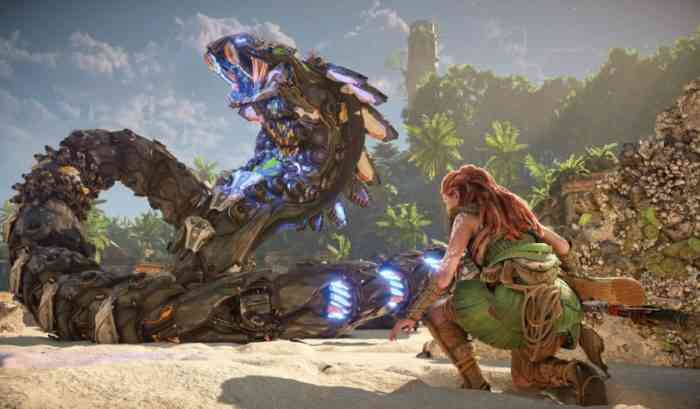 Three words: “pressurized acid streams.” Not enough? How about three more: “electrified rattlesnake tail.” The Slitherfang has tons of ranged options for taking you down, whether it be lasers of green acid or waves of lightning. That tail also happens to be a weak point – you can disable it and use its power for yourself as the fight progresses.

Its hood also hides a nasty trick. When opened, it can fire sonic pulses to daze the player, leaving them open to all the other tricks up the Slitherfang’s non-existent sleeves. Not that it would wear sleeves to hide things in anyway – given, you know, the unsubtle destructive warpath this thing creates.

Though GameInformer saw an extended fight scene between the player and the Slitherfang, there could me more waiting in the shadows. Horizon: Forbidden West’s developers dropped a bit of a tease, implying that we hadn’t yet seen everything this snake is capable of.