The seasonal event will kick off tomorrow with the grass-type Pokémon Tsareena joining the fight. Announced earlier this month, Tsareena is an All-Rounder whose moveset includes Trop Kick and Grassy Glide. Players can get a free licence for Tsareena just by logging in before December 31.

The rest of the festivities will begin on December 15 and last through January 16. This will start with Snowball Battle mode. In this mode, players will fight in quick battles where KO’d Pokémon will turn into snowmen. While they are frozen in place until their revival, they can still provide tactical information to their team. 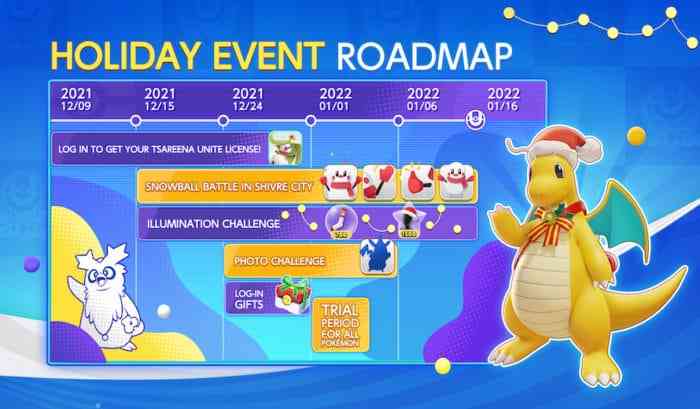 In these Snowball Battles, players will have a chance to defeat Delibird. Doing so will win the player a gift box that has a random one-time battle item that immediately equips. Players can also take on Articuno during these battles.

In addition to the new battle mode, players can take part in the Illumination Challenge where they need to light up the tree in the player lobby. Players can obtain these lights through daily and challenge missions. Collecting these lights will unlock decorative items and bonuses including a one-day licence for Alolan Ninetails, new fashion items and other holiday decorations.

Between December 24 and January 1, players can also open Pokémon Unite to receive daily rewards such as Aeos tickets and item enhancers. There will also be special gifts with a limited selection of items. Then from January 1-3, players will be granted access to every Unite licence in the game. Now you can finally try out the Pokémon you never bought the licence for!

The Pokémon Company also released a trailer to showcase the upcoming seasonal updates. The trailer gives players a sneak peek of what’s coming this month, and a tease of Dragonite in action. Dragonite will be flying into Unite on December 20. So be sure to keep logging in this month to take advantage of the holiday season!