Ningguang’s image was shared on social media. It showed the playable character wearing a blue dress with her hair down as fireworks blasted behind her. Her default get-up is a white and yellow dress with black sleeves. This leaked skin shows a relatively similar design, but has some lovely shades of blue that compliments her hair. This Genshin Impact character uses a Catalyst. She is also the second 4-star character to get here own outfit—Barbara being the first. 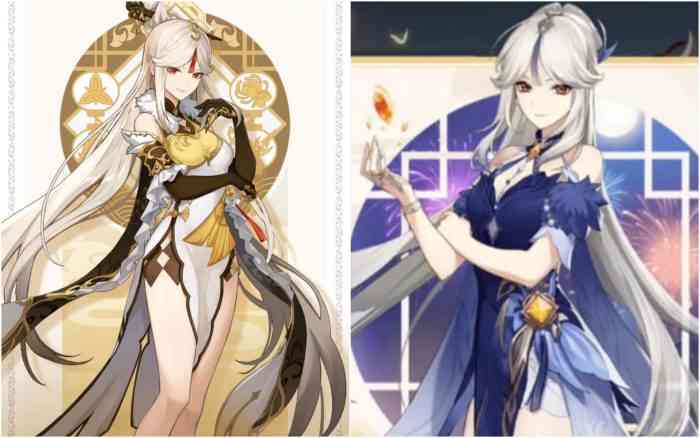 Genshin Impact fans have described this brand new skin showing Ningguang in her “blue butterfly dress” as “very beautiful.” The outfit will reportedly be called Orchid’s Evening Gown. According to multiple sources, players can get it when they take part in the Lantern Rite event.

MiHoYo has neither confirmed nor denied this leak. With that said, there may still be a chance that things will turn out exactly as multiple sources have claimed.

A known Genshin Impact insider has also revealed that the next character getting a skin is Keqing. This upcoming skin is going to be relatively “normal” and will look a lot like Bronya from Honkai Impact.

This same leaker was also the source of the information surrounding the limited banners featured in Version 2.4. According to the leak, Shenhe ad Xiao are the showcase of the first one, while Ganyu and Zhongli will be in the one after that.

Although these details come from a known leaker in the Genshin Impact community, fans must still take it with a grain of salt. After all, there is still no official announcement from miHoYo. However, they are going to have a Special Program livestream about Genshin Impact Version 2.4 on December 26th at 7am ET.

Do you like Ningguang’s new look? Let us know in the comments below.

Lord of the Rings: Gollum Story Is Parallel to LOTR’s ‘Early Chapters’
Next
Titanfall 2 PC Players Can Set Up Their Own Custom Servers
Previous
New Genshin Impact Characters Leaked