You Can Now Literally Sit on Genshin Impact, Thanks to Razer

A New Dimension, A New Adventure

Depending on who you ask, Genshin Impact‘s explosive rise to popularity could have happened for many reasons. The game has its fans and detractors, but all are in agreement that sit-ability had nothing to do with anything Genshin. MiHoYo, the game’s developer, is responsible for a variety of merch for their flagship title. You can wear Genshin Impact clothing, you can drink out of Genshin mugs, and you can even stare longingly at the Genshin poster on your wall – happy that the game exists but sad at the economic reality of your life preventing you from playing anywhere near as much as you’d like to.

But now, you can experience Genshin Impact like never before: by impacting the Genshin yourself!

You know, by sitting on it.

They made a chair, is what I’m trying to say. 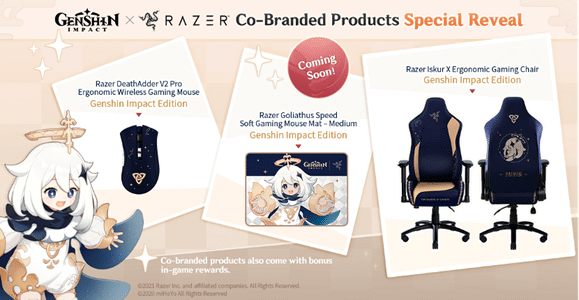 Razer, the popular manufacturer of PC gaming accessories and computer parts, are putting out special versions of a mousepad, a mouse, and a gaming chair. The mouse in question is their Deathadder V2 Pro model, the chair is the Iskur X Ergonomic gaming chair, and the mousepad… look it’s a mousepad there’s not much to innovate on, but they’re still pretty good!

Conveniently, the full set allows you to take the experience further – you can now squash the face of a small anime girl by using Genshin Impact, while sitting upon a Genshin throne as you play the game in a more immersive manner than ever before. There’s also the bonus in-game rewards, mostly taking the form of in-game resources, but I’m sure they pale in comparison to the immersion you’ll feel with this combo.

The items aren’t yet available for purchase – there’s no official release date, but they’re already available for pre-order. So it’s a definitive “soon ™”, but since we’re rapidly approaching the end-of-year holiday season, they can’t be too far away.