Bad news for Marvel’s Avengers players on PlayStation. Spider-Man will be coming to the game on PS4 and PS5 this month, but there will be no special story missions for the character. If it’s any consolation though, Xbox, PC, and Stadia players aren’t getting any Spider-Man missions either.  You’re not exactly being left out.

Your ol’ pal Zane called this a couple of months ago, when Crystal Dynamics was calling this an “event” instead of an “expansion”, like the Kate Bishop, Hawkeye, and Black Panther had. Crystal Dynamics specifically said there would be “cut scenes and a story”, which there will be, but they chose their words very carefully. 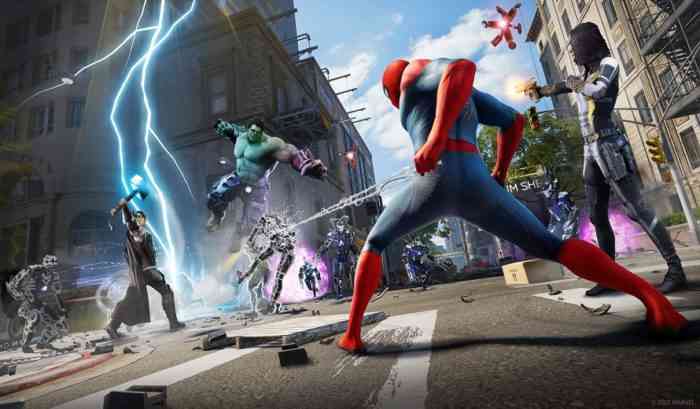 The deal with the Spider-Man story is that the webhead has been dealing with AIM in his own way. This will be told through audio logs and illustrated cutscenes. These will unlock through beating challenges related to Spider-Man as a playable character. So, again, they didn’t lie. There will be a story, but no story missions.

It is a shame though, since the trailer for Spider-Man showed him kicking all sorts of AIM butt and interacting with the other Avengers in ways we would like to see expanded upon. At least the illustrated cutscenes will be voiced by the voice actor Sean Chiplock. Chiplock will also likely providing a fair amount of voice work for the audio logs.

When asked why this direction was chosen for the Spider-Man content, gameplay director Philippe Therien said, “We want to spend our efforts on content that everyone can enjoy, so we chose to spend a lot of our energy on the Klaw raid that’s coming up at the same time. Really that’s a simple decision for us. Spider-Man can play all the content, but then we release a piece of content that’s good on all platforms. Really that was a decision that’s been that way since the beginning.”

Spider-Man will be available on PS4 and PS5 starting on November 30th. Marvel’s Avengers is available on PC, PS4, PS5, Xbox One, Xbox Series X|S, and Stadia.

Are you bummed out about this news? Let us know in the comments below.