What’s in Store for the Web-Head?

There are a few updates and additions coming to Marvel’s Avengers before the end of the year. The loot/gear/resources system is going through a major re-working, we will see the game’s first official raid, and PlayStation players will get access to their own Spider-Man… again.

On the game’s Discord channel, Senior Producer Dan Matlack chimed in to answer the questions some of the fans had regarding the raid and Spider-Man. He said that “Spider-Man is what we call an ‘event’ so he will have a cut scenes and a story for sure.” 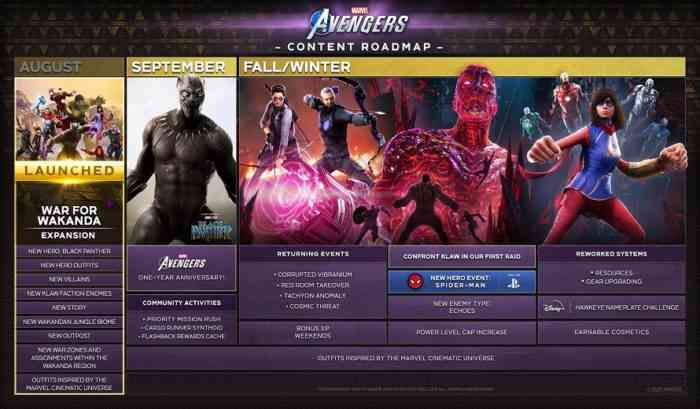 That sounds great and all, but the wording is a little off. The previous DLC heroes, Black Panther, Kate Bishop, and Hawkeye had their own “expansions”, which is what we are hoping for; story, hero, new biome, maybe a new boss. However, “events” are something totally different. Previous events include things like the Tachyon Anomaly, Corrupted Vibranium, and the Red Room Takeover.

These “events” have some background explanations to give them context within the game, but they are a far cry from an actual story. Am I dissecting the words of Matlack a little too much? Maybe, but what I’m saying is, temper your expectations.

As for the raid, players will be facing off against Ulysses Klaw in his sonic form, as he appeared at the end of the War for Wakanda expansion. Details on this are still scarce, but Matlack shed some light on that too. When asked about players being able to explore new areas, he said “It’s unique, but with familiar [environments]”.

Any player of Marvel’s Avengers can tell you what answer means. There will likely be biomes that are reused and rooms or areas that are reused, put together in new ways; therefore, unique, but familiar. Still, raids are new types of missions, so what’s a reused asset or two? There are no concrete dates on when these updates will be implemented. Marvel’s Avengers is out on PC, PS4, PS5, Xbox One, Xbox Series X|S, and Stadia.

What are you hoping for from future Avengers updates? Let us know in the comments below.

The Ascent Announces New DLC: Cyber Heist
Next
Disco Elysium: Final Cut Will Be Available for Switch and Xbox, Too
Previous
Step Into The Horror With Resident Evil 4 VR