GTA Trilogy – The Definitive Edition’s physical versions are delayed. Rockstar Games made the announcement on social media, much to the dismay of the franchise’s fans.

“The release dates for the physical versions of Grand Theft Auto: The Trilogy – The Definitive Edition have changed,” Rockstar wrote.

The game’s physical release was supposed to launch on December 7th for PS4, Xbox One, Xbox Series X/S, and Nintendo Switch users. However, following the collection’s relatively troubled digital launch earlier this month, devs have decided to push it to a much later time. 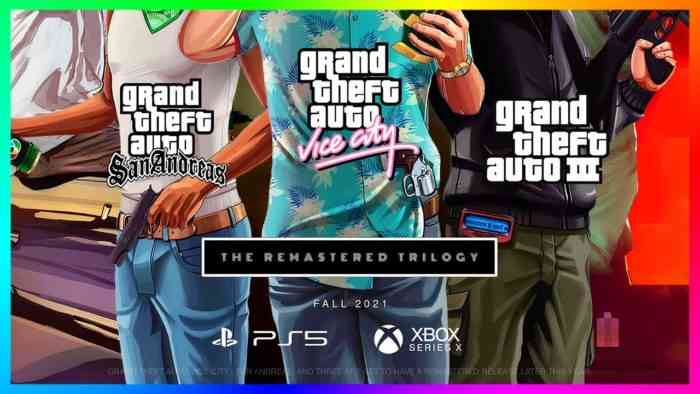 “Xbox Series X/S, Xbox One, and PS4 will now release on December 17th,” they continued. “The Nintendo Switch version is coming in early 2022.”

“The Grand Theft Auto series, and the games that make up this iconic trilogy, are as special to us as we know they are to fans around the world,” Rockstar stated. “The updated versions of these classic games did not launch in a state that meets our own standards of equality, or the standards our fans have come to expect.”

Earlier today, Rockstar also released GTA Trilogy Definitive Edition’s second major patch. It fixed more than 100 bugs that fans of the franchise complained about. The version 1.03 update patch addressed a variety of issues found in all three games. These include some spelling mistakes on in-game signs, as well as the instances wherein rain occurred indoors during the game’s cutscenes. It also added a cloud cover for when players fly at high altitudes in San Andreas.

“We have ongoing plans to address the technical issues and to improve each game going forward,” GTA Trilogy devs stated. “With each planned update, the games will reach the level of quality that they deserve to be.”

Are you waiting for the physical versions? Let us know in the comments below.