Wildest Guns in the West

The 1994 gallery shooter Wild Guns mixed elements of sci-fi and steampunk with Western genres, five years before Wild Wild West I might add. It got a second shot with Wild Guns Reloaded a few years back on PC, PS4, and Nintendo Switch.

The original game had fans play as either Annie or Clint, but Reloaded added two new characters, Doris and Bullet the Dog. There were also new levels, weapons, and bosses to fight, as well as up to 4-player co-op action. 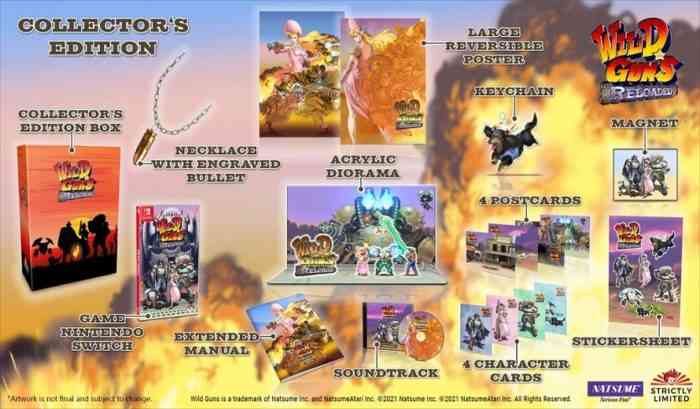 Strictly Limited Games and developer Natsume have announced a new Collector’s Edition for Wild Guns Reloaded, which will be available on Nintendo Switch and PS4. Each order comes with a Necklace with an Engraved Bullet, a Large Reversible Poster, an Acrylic Diorama of all four characters fighting a boss, a Wild Guns magnet, an Extended Manual, the Soundtrack, four Postcards, four Character Cards, a Sticker Sheet, and a keychain of Bullet the Dog. All of these items come with a physical copy of the game in a Collector’s Edition box.

Of course, being a Strictly Limited Games campaign, there are limited quantities of these Collector’s Editions. 1,500 each for Nintendo Switch and PlayStation 4. They are also releasing 2,000 copies of the standard edition each for the two platforms.

If you are super old school, there are also reprints of the original Wild Guns being made for the SNES. Pre-orders of all these purchase options are live now. Wild Guns Reloaded is available now for PC, PS4, and Nintendo Switch.

Did you play the original Wild Guns back in the day? Let us know in the comments below.

Spelunker HD Deluxe (Not Spelunky) Is Coming to PS4 and Switch