To say SUDA51 has a “style” is a bit of an understatement. His games are wild, flashy, and downright insane. The amount of sheer chaotic energy pouring out every animation and line of dialogue can’t really be quantified by a single word. The man behind Lollipop Chainsaw and Killer is Dead was never going to take a “conventional” approach to anything, and apparently, merchandizing isn’t immune to any of this.

To date, no official outlets for No More Heroes merch exists, but that hasn’t stopped people from picking up T-shirts from sites like Redbubble. When SUDA51 found out about this, his response wasn’t the “hey, maybe don’t steal our designs” you’d expect from most people. It was more along the lines of “sure, why not?” 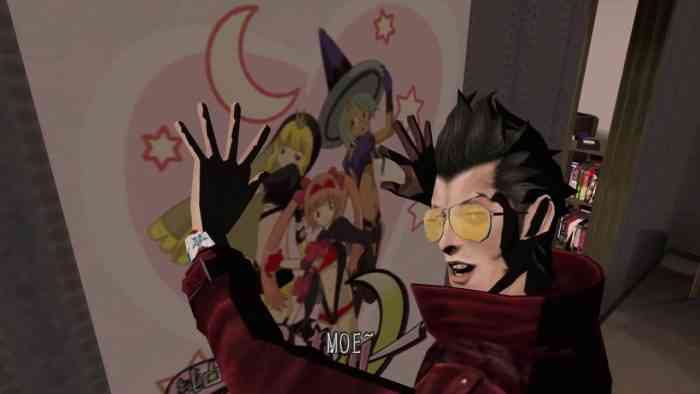 “The shirts you see behind me were shirts that we actually made at Grasshopper,” Suda said during an interview. “We’re not really selling [them] officially. I’m not sure if it’s okay to bring this up, but there’s a site called Red Ribbon, and they appear to be selling these shirts on their own without permission. Since we’re not doing it, if anyone out there wants a shirt, check out Red Ribbon. They got ‘em there.”

So there we have it. Not only were fans given a green light to pick up unofficial merch, he even recommended a specific outlet. Most outlets would pay through the nose for messaging like that, and here’s SUDA51 just giving it away. You have to respect a move like that.

A number of factors probably led up to this decision, beyond the obvious. SUDA51 is the CEO of Grasshopper Manufacture, which only has a 10% ownership in the No More Heroes IP. They certainly care about the end profit, but not nearly as much as the real owner: Marvelous Inc. This makes them a bit more flexible when it comes to their own discussions of the game. On top of that, the 10% ownership is part of the reason why No More Heroes 4 is unlikely to exist, since SUDA51 has little to no say in the matter. They don’t have to worry about long-term repercussions because there (probably) aren’t a whole lot of those to worry about.

All this led up to a perfect storm – something that very few game developers have the privilege to do: endorse bootleg products.