The Best There Is At What He Does

Marvel have really been pumping out the games over the last little while – from critically acclaimed releases like Spider-Man and Spider-Man: Miles Morales to… less well-received titles like the controversial marvel’s the Avengers. Today’s PlayStation Showcase gave us a look at the upcoming Guardians Of The Galaxy game and Spider-Man 2 – along with the surprise reveal of another game that’ll be exploring one of Marvel’s most popular characters: Wolverine.

Everyone’s favorite adamantium-plated Canadian will be getting his own game, from the team behind the critically-acclaimed Spider-Man: Miles Morales. Unfortunately we didn’t get too much out of the reveal trailer, but there is a nice cinematic that shows off Insomniac’s interpretation of Wolverine just a little – we see him drinking in a dodgy-looking dive bar, having just finished up a brawl when he pops his claws to take care of a straggler. You can check out the cinematic right here:

Insomniac’s Head of Franchise Strategy & Studio Relations, Ryan Schreider, outlined the process of getting Wolverine into development in a PlayStation Blog post just after the showcase event:  “Back when we were working on Marvel’s Spider-Man, there would be times where all of us—Insomniac, Sony Interactive Entertainment, and Marvel—would brainstorm together about the future beyond the web-slinger. And even in those early discussions, Wolverine continually came up as the character we’d be really stoked to work on together. Fast-forward a couple years and we’re suddenly standing in front of Sony Interactive Entertainment and Marvel formally pitching a PlayStation 5 game starring the adamantium-clawed Mutant!” 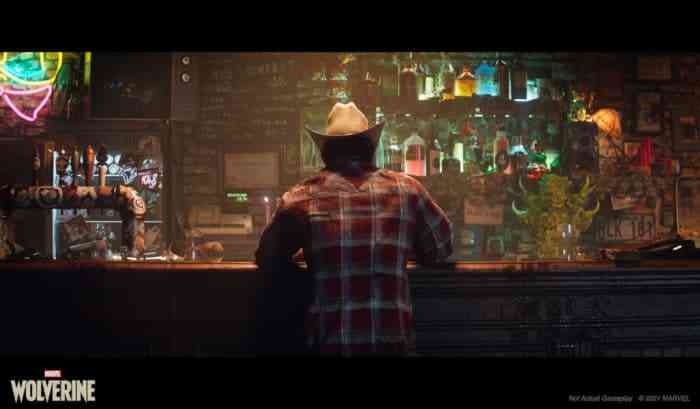 Judging by the cinematic and by the team’s passion for the character, it’s looking like Wolverine fans will be happy with Insomniac’s interpretation of the character. Marvel’s Wolverine is still very early in development, so we don’t have an idea of a release date quite yet – but rest assured, we’ll be keeping an eye on this one over the next few months!

Marvel’s Guardians of the Galaxy Review – A Flarkin’ Good Time

4 Reasons Why I’m Actually Hopeful About Marvel’s Guardians of the Galaxy
Next
Ghostwire: Tokyo’s Trippy Gameplay Trailer Revealed, Out to PS5 in 2022
Previous
Insomniac Confirm Spider-Man 2 Is Coming To PlayStation 5