The new Jackbox Party Pack 8 trailer has been released, and all five games look pretty solid. With all but one of the Jackbox Party games having been released between October 13th and October 18th, it is expected that the eight pack will release around the same timeframe. 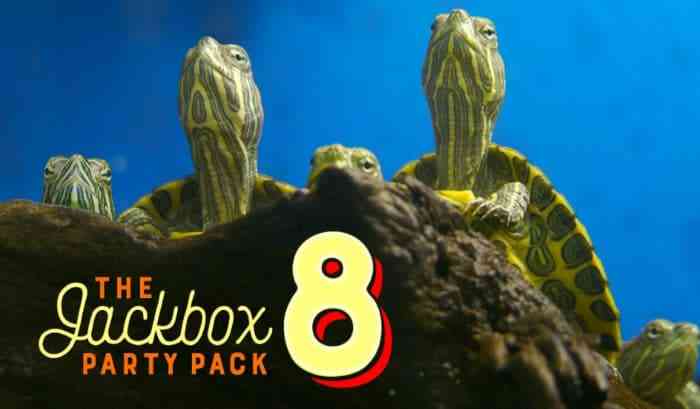 The first modern Jackbox Party Pack was released in 2014, with an additional Party Pack coming out each successive year. With each Party Pack containing five games, all games have been announced so far for the latest addition to the franchise.  The first game, Job Job supports up to 3-10 players and allows you to answer classic interview questions. The twist is that you can only use words from the other contestants’ answers to earlier icebreaker questions. The winner of the interview will win the “job” and the game.

The second game, The Poll Mine, is the first head to head game for two players or for up to two teams of five. The objective of the game is to escape by picking the correct ranking options from a prior poll – without knowing what ranking section you’re looking for. With streaming options, this game seems to be the highlight of the pack.

The third game, Drawful: Animate is essentially Pictionary, but with GIFs. The fourth game, The Wheel of Enormous Proportions, is a wheel of fortune twist on a Trivia game. Finally, Weapons Drawn is a Clue! or Among Us like game – except where every player is simultaneously the murderer and detective at the same time.  In order to win this mystery-filled game, you must both catch other players and commit crimes at the same time.

What do you think of the newest games added to the Jackbox Party Pack games franchise? Let us know down in the comments, or hit us up on Twitter or Facebook.

Sacrifice Your Friends is Mario Party Meets Cthulhu
Next
Mass Effect 5 Might Be Developed in the Unreal Engine
Previous
Horizon: Forbidden West is Your Last Chance for a “Free Upgrade to PS5”