My first time with one of Jackbox’s yearly released multiplayer games in England, hanging out at a friend’s flat and trying to make my crush laugh with my Quiplash puns. In the years since, I’ve played Jackbox titles with my Overwatch six-stack, brought it to employee housing at an amusement park, and used it to connect with elderly relatives.

Usually, Jackbox releases its games in curated packs. They usually come with five new multiplayer titles that can be played with around 3-8 people. The best part? They only require one person to own the game. Sometimes the titles won’t be new but reworks of earlier games, which is how we come to have the third iteration of Quiplash and the second of Trivia Murder Party.

I love these games, but this model can make it difficult and expensive to play the games you want. Most people, in my experience, have one or two games per pack they really want, but to play them, you must buy the entire pack. 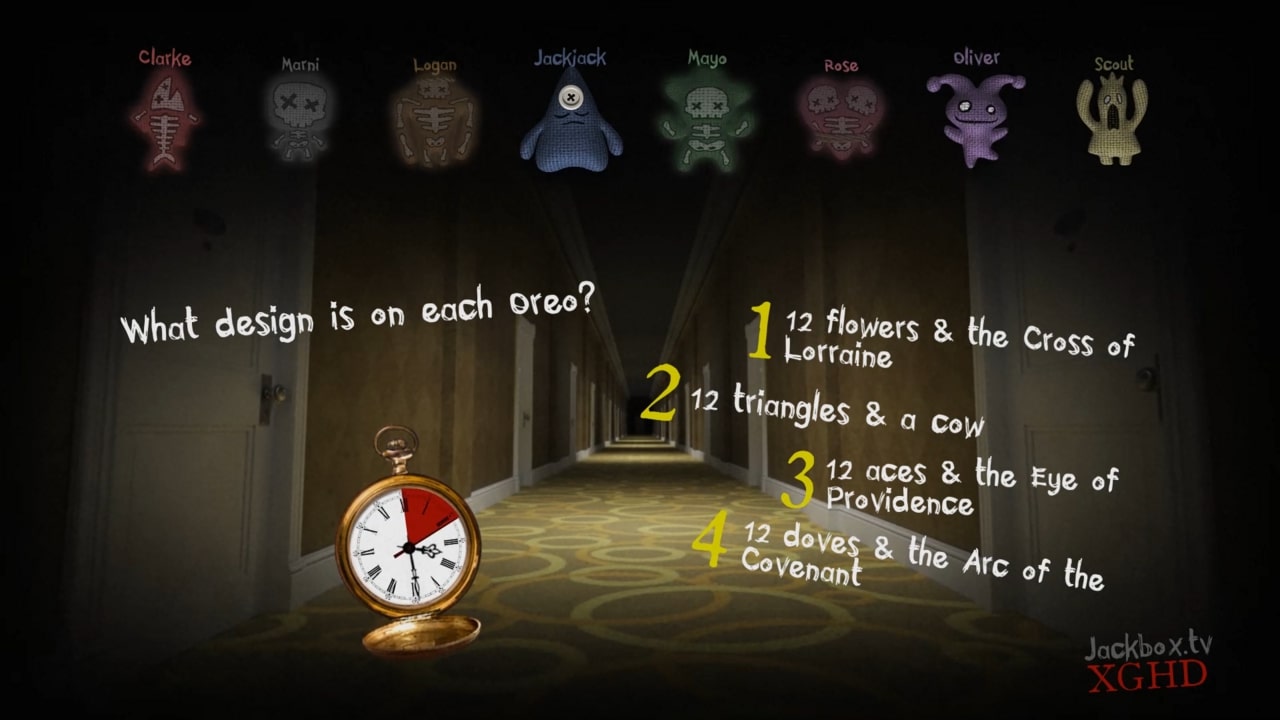 It’s fantastic that only one person must own the game, but there’s a drawback. When you’re playing online, you must figure out how to get it so everyone else can see it. If I want to play Monster Dating Monster, my friends and I use my Steam account. If we want to play Tee K.O. we use my besties. And if we want to play Mad Verse City, we summon an Eldritch being.

Before, buying a Jackbox Party Pack felt like a big decision. You picked based on a pack’s strongest titles, never quite happy with the games in other packs that you’re missing out on. Combining three of Jackbox’s most popular games in The Jackbox Party Starter breaks from the pattern, allowing fans to purchase a title containing all winners.

And Quiplash 3, Tee K.O. and Trivia Murder Party 2 are winners.

Cream of the Crop

All Jackbox games are played so that only one copy of the game is needed. The owner boots up whichever pack they have on the console of their choice for the players, who can be virtual or in-person. There’s an option for a non-playing audience as well, which is great for streaming from Twitch. Players use their phones to go to jackbox.tv with a special room code that lets them into the game.

Quiplash 3 is the most updated version of Jackbox’s classic comedy game, where players are given prompts to fill out answers to, with all the answers presented and voted on by the rest of the players, as well as any audience members (which, great for streamers, can run up to 10,000!).

Tee K.O. is a drawing-based game where players are given time to draw anything they want, with suggestions if desired. This is followed by the chance to produce as many short slogans as you can in the time limit. Finally, players can combine a random selection of slogans and drawings using t-shirts as canvases. The t-shirts are then presented to the players to vote on, and the winner proceeds to the next around. You can buy the shirts after the game ends, a fantastic feature. I myself own a t-shirt with a drawing of the globe where the only landmass is Ohio, accompanied by a caption underneath that just says “Wack.” 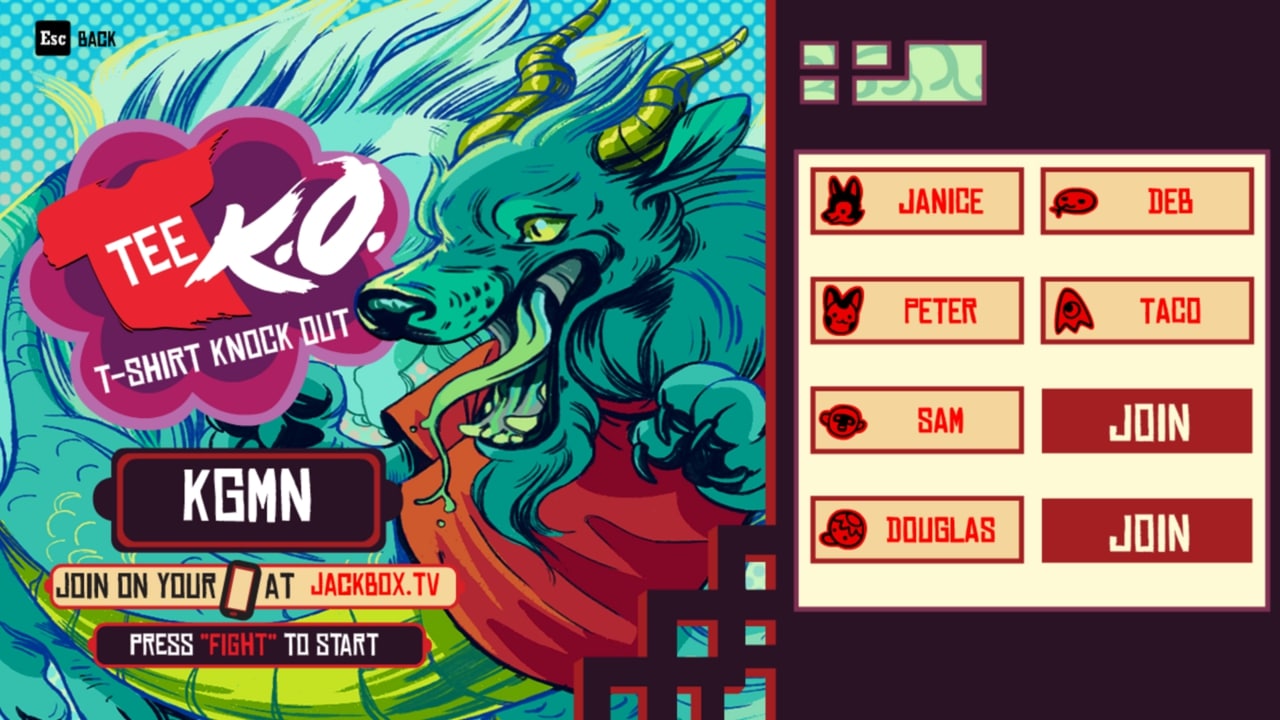 Trivia Murder Party 2 is a trivia game à la Rod Serling, set in a gloriously macabre Shining-esque hotel. A fiendishly lighthearted narrator asks players trivia questions where you either answer right or go to the “Killing Floor,” which introduces a series of minigames you must solve in order to avoid imminent slaughter.

Neither this or the original Trivia Murder Party are my first choice. I’ve always found the minigames too frustrating or random to really enjoy (and I know that’s the point!). However, I’ve also seen firsthand how nuts people go for the murder trivia aesthetic. It fully earns its place in The Jackbox Party Starter as a delightful, polished update to the original.

It’s hard to speak to the quality of these titles, as they’ve all been released before. Each of these titles are fun and iconic, and a good, if slim, representation of the best games Jackbox has to offer.

New With the Old

Jackbox Games boasts that all three titles have been updated with new settings and features. On the surface, the biggest change is the sleek, friendly interface that greets players on the title screen. Some of the new features include moderation, subtitles, content filtration, and settings menu upgrades. These updates won’t be obvious for most people, but they will be huge improvements for certain fans, especially streamers. I hope these changes, as well as the all-encompassing localization into French, Italian, German, and Spanish, make it into future Jackbox Party Packs.

However, these upgrades are so comparatively minor that it begs the question: who is this for, exactly?

The most logical audience would be people who don’t have any Jackbox games at all: people, who, for whatever reason, have missed the zeitgeist until now. The Jackbox Party Starter is perfect to introduce newcomers to the franchise, but what about once they’re hooked?

The Jackbox Party Starter has three stellar games, but it’s still only three out a couple dozen. For example, it’s missing many popular games like Fibbage or Drawful. This means new fans will still have to buy more packs if they liked what they see. And because the pack is all previously released games, they risk repurchasing a title. The bite-sized approach for new fans may be a good strategy for some. However, it ignores how bad it feels to buy the same thing twice.

Maybe the appeal is for people like me, people who have some Jackbox games on Steam and would like them on a console, or vice versa. If so, that seems like a small demographic.

While it’s nice to see Jackbox Games try to revisit its frustrating business model, this solution won’t satisfy anyone.

I’ve heard the idea go around that Jackbox should start a subscription service instead of releasing new packs every year. While subscriptions are at an all-time high, I would love to have access to the full catalogue of Jackbox’s endlessly entertaining games. Right now, I squirrel them away one at a time, forever comparing notes with my friends to figure out exactly who has what.

The Jackbox Party Starter is a great first entry into the franchise, or as separate console addition to a collection. However, its slick presentation and quality-of-life updates might not be enough to appeal to all but the most hardcore of Jackbox fans.

***A Nintendo Switch copy of The Jackbox Party Starter was provided by the publisher.***