Xbox as expected shares all games that are coming in the first half of August, in its constant effort to keep its subscribers content and satisfied. The game list includes a game of the year contender Hades, Skate 3, Curse of the Dead God, and much more. 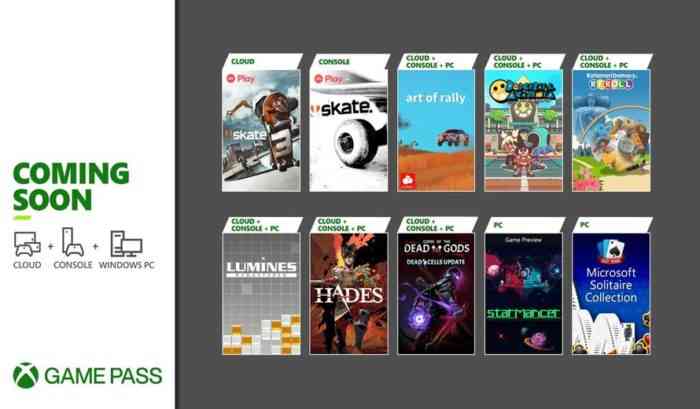 The original Skate and Skate 3 games are coming to gamepass on August 5th. Skate is the ultimate skating experience where your job is to escape the cops, and annoy random pedestrians, while Skate 3 focuses more on co-op experience and lets you build your ultimate skating team.

Hades is a game of the year contender of 2020, developed by an indie studio, and took the PC gaming world by storm. Now it’s coming to Xbox and Gamepass. Hades is a rogue-like dungeon crawler game, you play as the son of Hades trying to fight your way out of the underworld, you will keep failing but you’re expected to also nonstop keep trying. Hades will be coming your way on August 13th

Other games that are also coming this month are Curse of the Dead Gods, Dodgeball Academia, Katamari Damacy Reroll, Lumines Remastered, and Starmancer all on August 5th. As well as Art of Rally on August 12th, and Microsoft Solitaire Collection: Premium Edition on August 17th.

Other games that are known to be coming to Gamepass this month are brand new Xbox exclusives such as 12 Minutes that is coming your way on August 19th, and of course, the long-awaited Psychonauts 2 coming out this August 25th.