Shin Megami Tensei is a Japanese franchise that is very popular in the video game community as its releases range from MMOs to tactical RPGs and typical action adventure games. The series has seen much success over the past few decades. As the franchise continues to grow, Shin Megami Tensei III Nocturne HD Remaster, one of the most popular releases in the series, will have its official themed fashion items as the company has partnered with SuperGroupies. 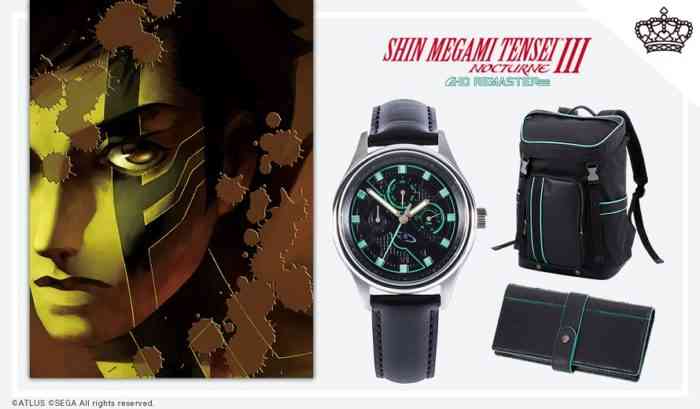 Supergroupies is a Japanese fashion brand that has collaborated with various brands in both gaming and anime including Street Fighter, Resident Evil, Nier and Yakuza. The themed designs bring these video games and anime to life via bags, watches and more.

In this lineup, fans are able to purchase a Shin Megami Tensei themed watch, backpack and wallet inspired by the protagonist, Demi-Fiend. The items are unisex and made to order.

The Demi-Fiend Watch has a black leather strap with a dial that is inspired by Demi-Fiend’s glowing, green tattoos. Other details include Magatama and Kagutsuchi moon phases. Kagutsuchi’s moon phase alters every three hours, similar to the in-game time.

The Demi-Fiend Backpack also showcases Demi-Fiend’s green tattoos. The pattern imitates his tattoos while the bottom of the bag highlights his outfit. The tattoos on his back are found on the back of the backpack. There is also a triangular tag with words embossed on it.

The items will be released between April-May 2022, however, pre-orders are available from 18th August to 5th September. The watch is USD$180 while the backpack and wallet are USD$148 and USD$118 respectively. The items can be found here.

What are your thoughts on the collection? Are you interested in purchasing any of the products? Let us know in the comments below or on Twitter and Facebook.