All Was Peaceful Until the Hoomans Came

Games where you play as an animal aren’t exactly uncommon, but Maneater laid down the foundation for one specific type of animal game: the animal revenge story. In its story, a baby predator minding its own business has its peaceful life violently disrupted by the presence of careless, callous, and generally antagonistic humans who pollute the environment with dire results for the wildlife. The result is a campy and enjoyable revenge campaign against those who would take advantage of the planet’s other inhabitants, filled all the blood and flying bodies you could ask for.

Lion Castle’s and GS2 Games’ newly announced title Angry Alligator takes the base premise of Maneater, replaces the shark with an alligator, and gives the whole thing a colorful, cartoony look. The lack of blood does subtract a bit from the campy charm, but we’re not complaining about more games that let you play as an abused animal wreaking havoc on a human community. Besides, if nothing else, it looks fun.

In this game, players take in the role of a baby alligator living in a swamp–a swamp that’s about to be invaded by humans. In order to survive, grow big, and deal with the invaders, you’ll have to learn to lure prey like ducks, deer, and even bears.

This trailer showcases cartoony character models, the slow development of the swamp, and other baby gators being captured by humans and kept in little cages. If you needed a good reason to go on a rampage against mankind, this video definitely gives you one.

The game offers a wide and colorful open-world to explore, full of creatures to meet and eat. But don’t worry, not every other character in the setting is just here as food. The baby alligator will be guided by Wisecroc on the path to gator greatness.

If you’ve got a hunger for cute animals causing chaos, you may want to keep an eye out for this game. Same goes if you’re a Maneater fan who wants to play a similar game with your kids. 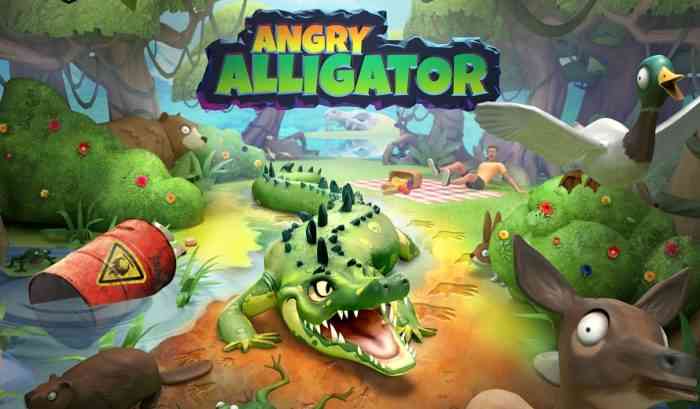 Angry Alligator will be available on Nintendo Switch and PS4 later this year.

What’s your favorite game with an animal player character? Let us know down in the comments, or hit us up on Twitter or Facebook.

The Callisto Protocol Trailer Shows Abominations Under Black Iron Prison
Next
Outriders Dev Have Yet to Get Any Royalties for the Game
Previous
Watch Dogs: Legion & Assassin’s Creed Crossover Will Have Darcy