Better Looking Than Ever

It looks like EA is trying to level up the motion capture game. FIFA 22, dropping on October 1st, is coming with Hypermotion capture technology. Realistic motion capture is all about the little motions as well as the big ones. The more motions you can preserve, the more grounded their movements look. There’s a whole trailer about it embedded below! FIFA 22 is coming to more or less every platform this Fall. You can learn more about it with the complete press packet, also embedded below.

Electronic Arts Inc. (NASDAQ: EA) today introduced EA SPORTS™ FIFA 22, featuring next-gen HyperMotion* technology that brings the football’s most realistic and immersive gameplay experience to life, in every match and across every mode on next-gen consoles and Stadia. FIFA 22 will be available worldwide on October 1 for PlayStation®5, Xbox Series X|S, PC via Origin™ and Steam, Stadia, PlayStation 4 and Xbox One.

Powered by HyperMotion, FIFA 22 combines Advanced 11v11 Match Capture and proprietary machine learning technology to deliver the most realistic, fluid and responsive football experience for next-gen consoles and Stadia, unlocking the raw emotion, passion and physicality of the world’s game.

HyperMotion technology enabled the integration of the first-ever motion capture of 22 professional footballers playing at high intensity. Additionally, EA’s proprietary machine learning algorithm learns from more than 8.7 million frames of advanced match capture, then writes new animations in real time to create organic football movement across a variety of interactions on the pitch. Whether it’s a shot, pass or cross, HyperMotion transforms how players move on and off the ball. 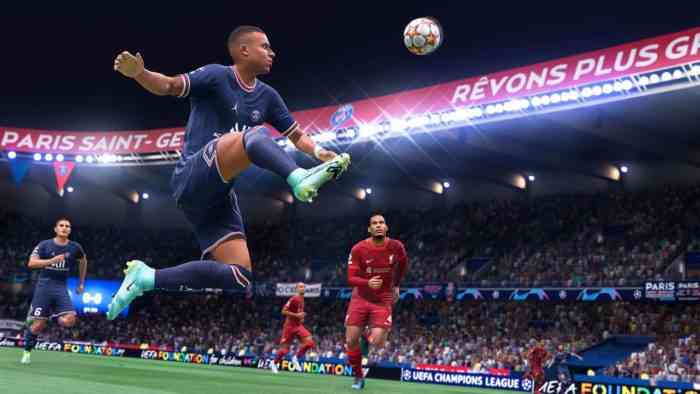 “FIFA 22 offers millions of fans around the world a chance to engage with the sport they love in an unprecedented way,” said Nick Wlodyka, GM, EA SPORTS FIFA. “Each player experiences FIFA in their own way but on-pitch gameplay is the unifying constant, so we’re excited to offer deep innovation there. HyperMotion elevates that even further on next-gen consoles and Stadia and completely changes the feel of the game”.

The new game also offers deep and innovative features across other parts of gameplay and our most popular modes including Career Mode, VOLTA FOOTBALL, Pro Clubs and FIFA Ultimate Team™. Fans can expect more consistency and distinct personalities between the posts with a complete goalkeeper system rebuild, an all-new Create a Club experience in Career Mode, reimagined gameplay in VOLTA FOOTBALL, and the introduction of FIFA Ultimate Team Heroes, completely new items that represent the stories and glory of cult players and fan favorites. More news on FIFA 22 innovation will follow throughout the summer.

Paris Saint-Germain striker and global football icon Kylian Mbappé graces the cover for the second year in a row, making him one of few to earn back-to-back cover star status, alongside others like Lionel Messi and Cristiano Ronaldo.

“Being on back-to-back FIFA covers is amazing,” said Kylian Mbappé. “I have a very special relationship with the game and look forward to enjoying FIFA 22 alongside all of you”.

With 17,000+ players across 700+ teams in more than 90 stadiums and over 30 leagues, FIFA 22 is the only place you can play in iconic competitions such as UEFA Champions League, UEFA Europa League, brand new UEFA Europa Conference League, Premier League, Bundesliga, LaLiga Santander, CONMEBOL Libertadores and CONMEBOL Sudamericana.

Plus, EA Play† members can get more out of FIFA 22 with early trial access and monthly in-game rewards. For more information on EA Play please visit the site.

FIFA 22 is developed by EA Vancouver and EA Romania and is available worldwide October 1, 2021, PlayStation®5, Xbox Series X|S, PC via Origin™ and Steam, Stadia, PlayStation®4 and Xbox® One. The FIFA 22 Legacy Edition will be available on Nintendo Switch™.

FIFA Needs More Than HyperMotion to Fix Its Issues
Next
Bright Memory: Infinite Is a Free Upgrade For Owners of Bright Memory
Previous
Psychonauts 2 Will Have an Invincibility Toggle That I Will Be Using