The big news for Super Smash Bros. Ultimate is obviously the new DLC fighter Kazuya from the Tekken series. However, there are some equally iconic characters coming to the game as well, just not in such an impactful way. Every time a DLC character is released, a round of Mii Fighter skins are also released. The Mii Fighter skins being added to the game in Round 10 include the Dragonborn from Skyrim, Dante from Devil May Cry, Lloyd from Tales of Symphonia, and Shantae from the Shantae series. Dante, Dragonborn, and Lloyd are all Swordfighters and Shantae is a Brawler. 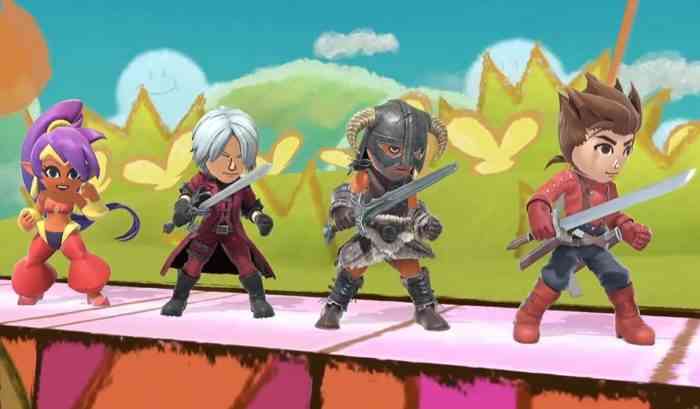 As you may well know, after Kazuya, there will only be one DLC fighter added to the game and then there will be no more. No matter who that fighter is, there will be a ton of fans upset that their favorite character was not added. There have been a ton of campaigns for different characters to be added as unique fighters, like Shantae, Sora, Master Chief, and others. Maybe these Mii Fighter skins will be some small consolation for fans of these characters. Still, one lucky fighter will be the final, ultimate Super Smash Bro, but I swear to god, if it’s another Fire Emblem character…

Kazuya and the other Mii Fighter skins will be released tomorrow, June 29th. Kazuya is part of the Fighter Pass vol. 2, but can be purchased separately. The Round 10 Mii Fighter costumes can also be purchased as a bundle or separately. Super Smash Bros. Ultimate is available now exclusively for Nintendo Switch.

Who do you hope to see as the final DLC character? Let us know in the comments below.