Why Resident Evil Going Supernatural Might Not Be A Bad Thing

Today on COG Considers: What the Hell is With That Doll?

All along, I’ve been team “Resident Evil Will Never Go Supernatural”. It wasn’t a move that I could see Capcom making, and even the early versions of Resident Evil 4 which got retooled into Devil May Cry or just plain turned down because of the quasi-supernatural elements, like the possessed dolls or fog monsters, seemed too far from the series roots for me.

My reasoning is this: Resident Evil has always thrived on sci-fi. It doesn’t matter that, say, The X-Files can shift from featuring ghosts to aliens within the space of a few episodes – after all, in real life, there are people who believe in both supernatural and extraterrestrial phenomena. It just didn’t feel right. Resident Evil has always focused on viruses, parasites, or fungi as opposed to ghosts, demons, and eldritch abominations.

Still, new footage from Resident Evil: Village has surfaced, and among the new enemies and characters featured is what appears to be a living doll, which terrifies me to my core.

And it got me thinking: why was I so scared? If I can accept it in The X-Files, why can’t I accept it in Resident Evil?

Here’s the thing: Resident Evil has gotten somewhat predictable, insofar as it’s always a disease. No matter the direction the game takes, you know it’s only a matter of time before they explain away the events of the entire game as the result of some disease that invariably involves zombifying or otherwise mutating their victims in some sense or another – whether that’s by infecting them with the so-called “Cannibal Disease” or by transforming them into hulking abominations.

So before the game has released, we already have good reason to believe that Lady Dimitrescu’s giant size and extendable fingers mean that she’s another Tyrant style BOW, or that the lycans are infected by some disease. Even Dimitrescu’s daughters’ ability to transform into swarms of insects is hardly new to the series, as Resident Evil 6 featured the Gnezbo – a sentient swarm of insects.

But what if the games took a different direction? After all, we’re getting arguably the most gothic environment seen in the series yet, with monsters derived from folklore like vampires, witches, and werewolves – unlike the relatively recent addition of zombies into the horror lexicon.

What if, this time around, it was supernatural?

It would definitely be the biggest twist in a series that has, arguably, gotten relatively stale, and it’s not like it wouldn’t be fitting. Resident Evil 7 introduced a first-person perspective and the most vulnerable protagonist the series has seen thus far, and the trailers involved Daughter – a character who was deleted from the final product but was referred to as Ghost Girl by fans – some of who thought that the game would be taking a supernatural turn with the franchise’s new direction, but what if they were just easing us in? 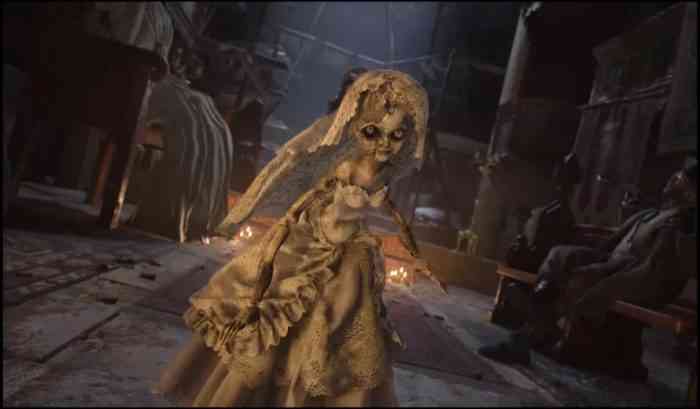 After all, Resident Evil Village seemingly revolves around a cult, and borrows a lot from Resident Evil 4, often considered the greatest in the series – so while they could just be trying to repeat past success, why not take the opportunity to do what nobody could have anticipated? After all, if the doll is anything to go by, they seem to be drawing at least some inspiration from earlier versions of Resident Evil 4, where more supernatural horrors were considered.

A turn towards the supernatural would give Capcom the chance to refocus the franchise and remind longtime fans and critics alike that they still have what it takes to surprise us, and open the franchise up to new possibilities. Future games wouldn’t be contained to the realms of sci-fi, and fans wouldn’t spend every game trying to figure out the inner workings of whatever BOW they have in store. The series would finally be unpredictable for the first time since we faced our first Ganado, so maybe I was wrong. Maybe a supernatural twist is exactly the right direction Resident Evil should take.