Team Orochi Reunites to Have Fun and Probably Kill People

At this point, it would be disingenuous to claim that we didn’t expect the final member of Team Orochi to be announced for The King of Fighters XV, but we’re still very happy to see Chris make his entrance. He’s small, he’s cute, and he’s here to tear both Team Hero and Team Sacred Treasures apart. This tiny but deadly fighter went down in history back in 1997, when he, Shermie, and Yashiro revealed themselves to be fanatical worshippers of the evil god Orochi. Soon after, Yashiro killed his teammates and then himself as sacrifices to power up Orochi, who was incarnated through Chris’ corpse. Shocking stuff, but it doesn’t seem like there are any hard feelings between the three. This trailer shows a glimpse of Chris’ special intro with Yashiro, where he appears to cheerfully greet his murderer. We guess Orochi cultists are made of sterner stuff.

Chris is a fast character whose move set revolves mostly around nasty kicks that launch his opponent across the battlefield–or which catapult him past his opponent’s guard and toward their unprotected back. It’ll take a lot of skill to pin this slippery little devil down, and once you have him cornered, you may regret it. As if he wasn’t nasty enough with his acrobatics, he also has the ability to move at completely inhuman speeds, allowing him to virtually teleport across the battlefield. That’s got to be a ton of fun.

Although Chris is by far the least menacing member of Team Orochi on the surface, don’t forget that he was the one who became Orochi’s host in the past. Yashiro is the one who executed their murder-suicide ritual and Shermie is gleefully sadistic, but Chris has always been described as able to kill with an innocent smile. Trust us, he fits right in. 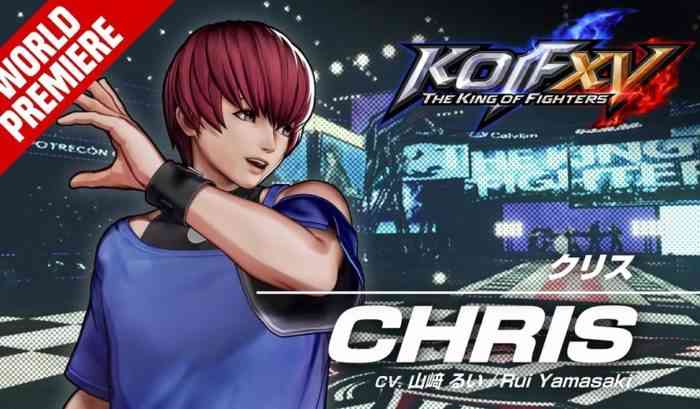 We don’t know what the band is up to now that they’re back together, but it can’t be anything good. The only question is whether they’re the new villains or if there’s someone even worse rolling into town.

Who are you looking forward to seeing in the next character trailers? Let us know down in the comments, or hit us up on Twitter or Facebook.