The Next Fighters Arrive

In case you missed it, Nintendo announced at last month’s Nintendo Direct that Pyra and Mythra from Xenoblade Chronicles 2 would be joining the ever-expanding Super Smash Bros. Ultimate line-up as part of the Fighter Pass 2. Today, Sakurai held a new Sakurai Presents to show off the upcoming character and announced that the dynamic duo would be making their way to the game later today. 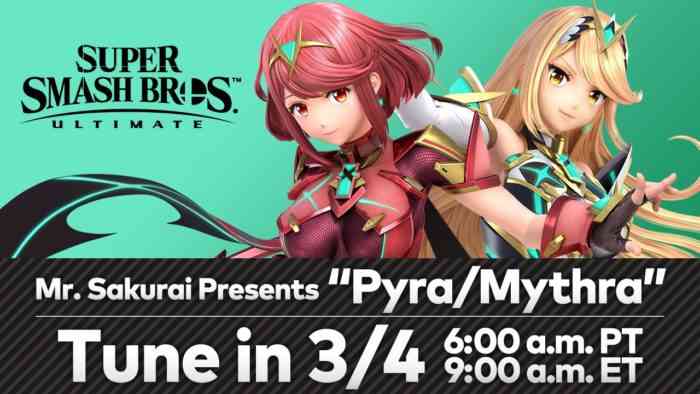 The power of fire and light will be at your command when Pyra/Mythra release as a two-in-one DLC fighter for #SmashBrosUltimate later today!

The “two-in-one DLC fighter” as Nintendo so elegantly put it in the Tweet above, are available as part of the game’s Fighters Pass 2 or as an individual for $5.99 USD.

Both Pyra and Mythra have their own strengths and weaknesses with Pyra being the stronger of the two, while Mythra is the faster. The dual-character is the second character from the Xenoblade franchise as Xenoblade Chronicles’ Shulk is also present.

Along with the character comes a brand new stage called Cloud Sea of Alrest where players fight on the back of the titan Azuda –lovingly known as “Gramps” in the game.

It also adds 16 new music tracks from Xenoblade Chronicles 2, bringing the series total to 27 with the existing tracks present in the game.

Here are all the songs being added by the DLC pack:

*The three titles marked with an asterisk are brand new arrangements made for Super Smash Bros. Ultimate.