And the Next Fighter Is…

Tonight’s Nintendo Direct started with what appeared to be a trailer for some sort of story expansion for Xenoblade Chronicles 2, however, that was not the case. Instead, what we got was a reveal that the character Pyra from the game would be joining the already boisterous roster in Super Smash Bros. Ultimate. 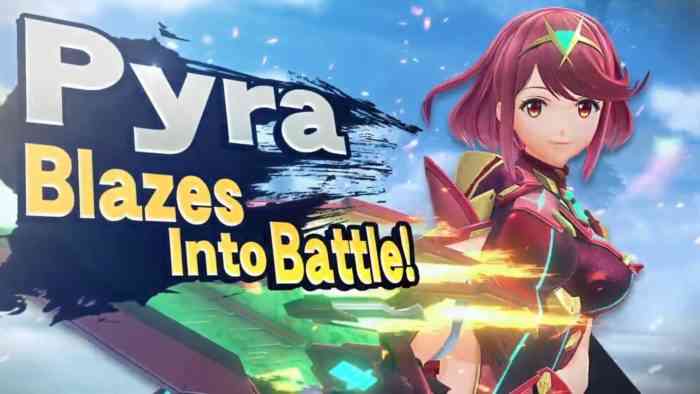 Not only will Pyra soon be a playable character, she will also have an alternate move set as players are given the option to play as either Pyra or Mythra. Pyra’s move set includes some hot moves like “Smash Flare”, “Flame Nova”, and “Prominence Revolt”. While Mythra’s move set includes shocking attacks like “Lighting Buster”, “Photon Edge” and “Ray of Punishment”.

Players can switch between the two characters mid battle, similar to Zelda/Sheik in Super Smash Bros. Melee. Pyra/Mythra’s Final Smash changes depending on which character you are using when you activate it, both of which feature Xenoblade Chronicle 2’s protagonist, Rex fighting alongside you.

Along with the new character comes a brand new stage, the titan Azurda. The stage also features Xenoblade Chronicle 2 characters such as Tora, Nia, Morag, and Zeke in the background.

There was no word on a release date for the new character in the Direct, so keep an eye out for that in the future!

You can watch the Smash Bros. Character Reveal below: