Fall Guys is Letting Players Get a Squad Together

Fall Guys is basically Takeshi’s Castle or Total Wipeout in video game format. You control a customizable bean-like being taking part in a fictional gameshow which involves falling in the most hilarious ways possible, as often as possible. While some players are adept at the game at this point everyone has some levels they’re not as good at – and some players, like myself, have been playing the game since release without actually managing to take home so much as a single trophy.

Luckily, the newly released Squad Mode looks like it’ll help alleviate that, giving players a chance to team up with their friends. The new mode pits your team against fourteen others, and lets you face the majority of the levels. Rather than scoring players individually,  the scores will be calculated on a curve, which can both save a team or kill its chances of success. For example, racing rounds will be scored based on the placement of everyone in the team, so one or two people placing close to last can cause an early loss just as much as a handful coming first can mean an easy victory.

This aims to make playing with friends more enjoyable, as an early loss doesn’t mean that you have to wait for the entire game to be completed to rejoin the action.

“Being eliminated does not completely eliminate you from the game,” said lead designer Joe Walsh. “You only get eliminated if your entire Squad perform poorly on any given round.” 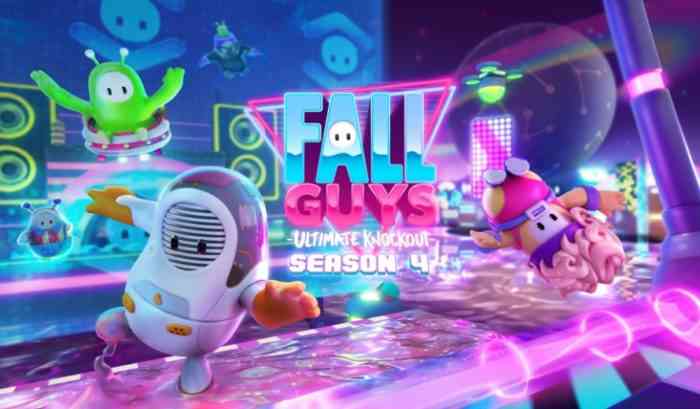 Final rounds are also receiving a tweak in Squad Mode, allowing players to win together, but there’s a caveat there, and the team at Mediatonic are working to tweak the rewards. After all, one player getting eliminated early on shouldn’t necessarily get the same rewards as someone who survived to the end, especially in some of the race-based rounds where only one person can have the crown/glory. Mediatonic have made some of the regular rounds into final rounds with today’s Season 4 patch.