At one time or another you have wondered something like, “Would Leonidas’ 300 Spartans and 40 WWII soldiers be able to defeat 3 T-Rex teamed up with 40 zombies?” It’s a strange thing to ponder, but these questions need answers. Brilliant Game Studios set out to find those answers with Ultimate Epic Battle Simulator, which was released in 2017. Now they are back with Ultimate Epic Battle Simulator 2, which Brilliant Game Studios is expecting to launch in the Fall. They recently released a trailer for it that shows “Millions of characters on screen”. 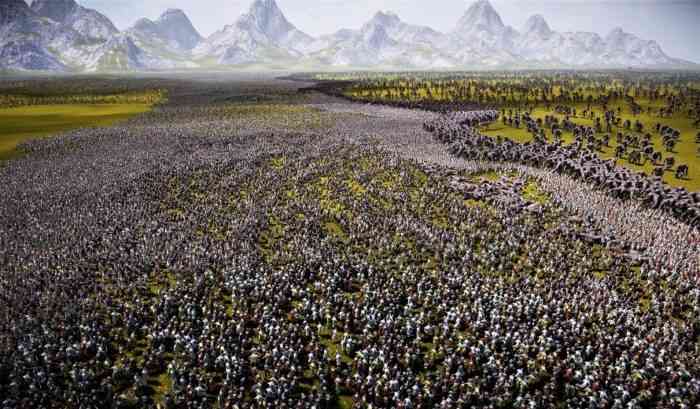 If the vanilla options in UEBS were not enough, the community has made a ton of mods to add your favorite characters, heroes, and other creatures to your game to fight it out. To that end, why would you need a sequel? While the trailer for the upcoming game does not include anything that isn’t available in the first game, just the scale and scope in the battles it offers is really incredible. We see the camera move across the battlefield from closeups to wide shots, involving a bunch of different armies and types of units. Hopefully, the new game will be able to push the size of our dream battles in ways the original never could.

In 2020, Brilliant Game Studios also released The Black Masses, which is a fantasy RPG that allows players to take part in massive battles like the UEBS games, but as a single character from a first-person perspective. There is no definite release date for UEBS 2, but hopefully we will see it launch in the Fall. Ultimate Epic Battle Simulator 2 will be coming out on PC.

Are you looking forward to UEBS 2? Let us know in the comments below.

River City Girls 2 Trailer Brings in Old and New Characters
Next
Modders Are Asking: Do You Feel the Bern?
Previous
The Captain is Dead Brings the Retro Sci-Fi Action to Steam and Mobile