It seems like just yesterday that the Terminator/Fortnite crossover was teased. That’s because it was. Good joke. It appears that Epic Games is learning to tease their new stuff and quickly follow it with a reveal before it can be leaked to the world. Late yesterday, Epic Games released a quick video confirming the suspicions of a Terminator crossover. Though there was a tiny bit of room for wondering which characters would be coming to Fortnite, that has been put to rest after an official reveal of the T-800 and Sarah Connor skins. 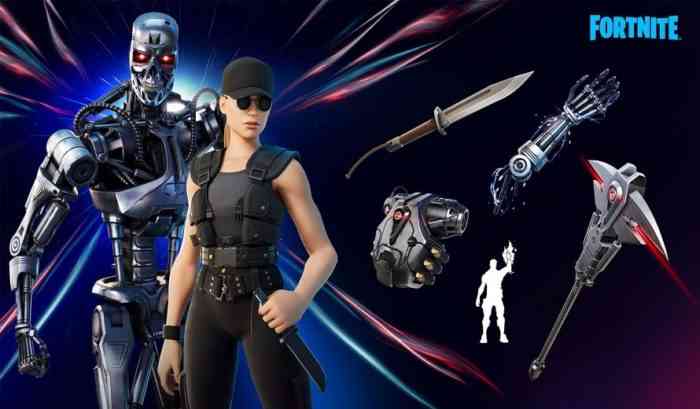 The short clip is a throwback to the end of Terminator 2: Judgement Day, where the T-800 lowers himself into the vat of molten lava, sacrificing himself for the good of humanity. That’s not exactly what happens here though. Instead, Jonesy appears, grabbing T-800’s thumbs-up hand and pulls him into the world of Fortnite. The skins are of the iconic Terminator characters, but Epic Games is using the skeletal form of the T-800 and a Sarah Connor with sunglasses, probably so that they can avoid paying for the likeness of Arnold Schwarzenegger and Linda Hamilton, or any of the other actresses who played Sarah.

Along with the skins, players will be able to pick up some interesting Back Bling and Pickaxes. Sarah Connor can choose between a severed robot arm as her Back Bling and a combat knife. The T-800’s Back Bling is a HK Skynet Uplink and the Pickaxe for both of them is called the Techno-Grip Axe, which is a futuristic version of one of humanity’s oldest tool. Fortnite players can pick up both of these skins now. Fortnite is available on PC, mobile devices, PS4, Xbox One, and Nintendo Switch.

Do you like the T-800 or Sarah Connor skin more? Let us know in the comments below.

Neptunia ReVerse Will Be Hitting PS5 This Summer