Will There be Another Big Reveal at the Showcase?

This year marks the 25th anniversary of the Resident Evil franchise, and Capcom are celebrating in a big way. Apart from the upcoming mainline entry we’ll be getting an animated series, a reboot of the movie series, and that’s just scratching the surface. There’s a lot of rumored projects, including a remake of Resident Evil 4 and a third game in the Revelations sub-series, and we’ll be seeing a closed beta for an (as-of-yet) unannounced game, but it looks like Capcom may be teasing something nobody could have anticipated: remasters of the original PS1 trilogy.

We’re crafting a first look at gameplay and combat in Resident Evil Village in the #REShowcase, just for you.

As part of the promotional campaign for the Resident Evil Showcase later this week, the team have been releasing videos like the above on Twitter, but fans have noticed something strange – namely, that the videos of the inventory screens are different than they were in the original games.

Of course, the thing complicating the issue is that every game of the original trilogy has had at least one remake or remaster, each of which introduced new gameplay elements or even changed the story from the original in a variety of way, whether it’s excising whole sections or introducing new characters. Still, it would be odd for Capcom to redesign something as ubiquitous as the inventory screens purely for promotional purposes.

The good folks over at Relyonhorror have compiled images like the one below, comparing the screens against the original, and you can see a noticeable difference. In the below comparison, you can see a lot of differences, from the text size, the number of inventory slots, or the layout. Hell, you can even see that the words File and Map have been pluralized – that’s a lot of effort for no payoff. 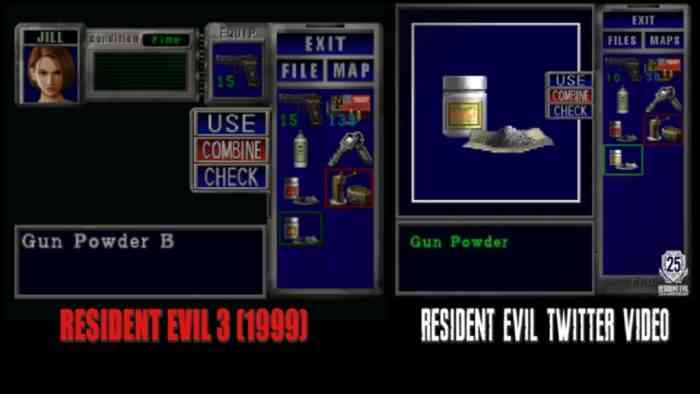 The good news is that if there is a remaster of the trilogy on the horizon, we might not have long to wait – what better way to celebrate the 25th anniversary than to go back to where everything started?

Future Capcom Games Could Have an Unusual Home
Next
The Last of Us: Part 2 PS5 Upgrade Reportedly Hinted At by Hermen Hulst
Previous
Hitman 3 PC Players Will Not Have to Rebuy the First Two Titles