Sink Your Teeth Into This Werewolf: The Apocalypse – Earthblood Gameplay Video

The World of Darkness is making a video game comeback and we couldn’t be happier, especially now that the vampires are finally sharing the spotlight. Ever since Werewolf: The Apocalypse – Earthblood was unveiled, we’ve been excited about it, and each new trailer only makes the hype stronger. Now Nacon and Cyanide Studio have revealed a six-minute gameplay video that shows off combat, stealth, and–most importantly–transformation mechanics. It’s gorgeous, there are werewolves, and the developers have a lot to share about game mechanics and a few general story beats.

As we all know, wolves are stealthy animals, so it makes perfect sense that turning into a wolf will help you pull off infiltrations and make stealth sections a breeze–but if you get caught, it’s recommended that you immediately go Crinos form and destroy all who oppose you. Personally, we think you should consider a self-imposed challenge to do the entire game in Crinos form, because Crinos form is a big scary werewolf. It has two separate combat stances, one for agility and one for strength, but both of them can pick up a guy in one arm and drag him around like a ragdoll. What more do you want from a game called Werewolf?

Seriously though, this game really does seem to be taking full advantage of its transformation mechanics. Protagonist Cahal doesn’t just take extra damage from silver bullets, he can slink into ventilation systems as a wolf, use supernatural Penumbra Vision to spy enemies and plan out his assault in advance, and fight in human form with a crossbow or stealthy take-downs. The main focus of this video is Cahal and his abilities, but what we see of the game’s world is also striking. Much of the game seems to take place in desolate environments: an overexploited forest, an arid desert, and an offshore oil rig. Fitting for a story about mother nature’s fiercest warriors taking her fate into their own hands. That said, we must wonder how much of the background mythology Earthblood will be borrowing from the original tabletop RPG. 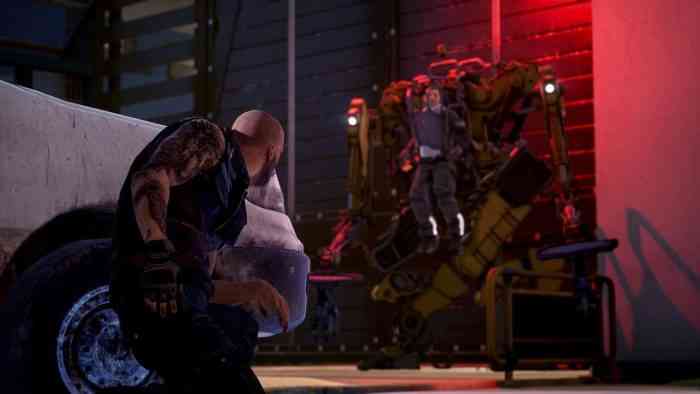 The original World of Darkness was functionally a cosmic horror story in many ways, after all, and one of the first things we learned about the Garou back then was that planet earth was already doomed. Your player characters weren’t trying to save the world, they were trying to make sure the rest of the universe didn’t go down with it. Think that might be a tad bit dark for a Triple-A game?

Will you be playing Werewolf: The Apocalypse – Earthblood? Let us know down in the comments, or hit us up on Twitter or Facebook.