Reddit is great, but it is also awful, so take this rumor with a grain of salt. We recently learned that Ubisoft’s Prince of Persia Remake would be delayed from January 21st, 2021 to March 21st, 2021. That two month setback is a bummer, but in light of other games that clearly launched too soon, well… On the bright side, this delay may bear juicy Switch-fruit. An image circulating Reddit shows the Prince of Persia: The Sands of Time Remake with a purchase option for Nintendo Switch. 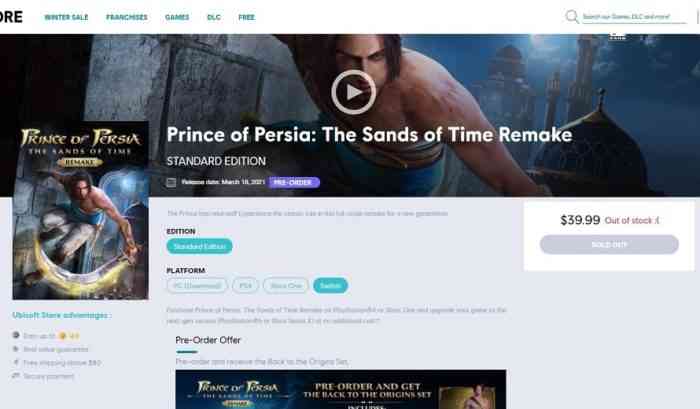 Ubisoft’s online store did at one point have that option, but it has since been removed. Technical error? Miscommunication? Accidental reveal? Who knows? If this turns out to be true, then that’s wonderful. I’m happy for Nintendo Switch owners. Maybe the recent delay is connected to a possible Switch release. Maybe Nintendo came late to the Prince of Persia Remake table and wanted to throw their name into the proverbial hat, setting back a multi-platform simultaneous release. That doesn’t seem like a likely reason to delay the whole game, but stranger things have happened.

High hopes won’t help when there is also evidence against this leak. Not only is the Switch purchase option gone, but the Nintendo Online Store does not have it listed, there is no box art with Nintendo’s logo on it, and the actual site as it was saved with the Switch edition also does not include it being listed in the FAQ and screenshot sources. Maybe these weren’t updated because the leak was an isolated incident or because it was a mistake, but again, who knows? Prince of Persia: The Sands of Time Remake will be coming out on March 21st, 2021 for PC, PS4, Xbox One, and maybe Nintendo Switch.

Do you think the game will be coming to Switch? Let us know in the comments below.