Rock Isn’t Dead Yet, and Neither is Holiday Cheer

No matter what winter holiday you celebrate, we can all agree that Christmas is super commercialized, especially in the gaming industry. But in a world where everyone else seems to be trading in meaning for cash way, Sold Out and Metronomik have taken a leaf from Zuke and Mayday’s book. No Straight Roads will be getting a ‘Christmas Edition’ title update on all four platforms, with the price tag set at absolutely free. Now that’s something worth celebrating! This update will be available in early December for PC, Xbox, and PS4 owners (Nintendo Switch owners will have to wait a little longer) and it will be a complete remix of the whole game. We’re talking new holiday outfits, decorations, music, and more. This trailer shows what it’ll all look–and sound–like in action.

The intrepid rock duo are wearing Christmas tree and candy-cane inspired costumes, Yinu is a little angel, DJ Sub has gone full Santa Claus, and 1010 are all wearing reindeer heads. Very seasonal, and also, just plain hilarious. If you own the base game and could use a laugh, you should definitely give the Christmas Edition a shot. Accessing it will be easy–just get into the boss fight menu in Vinyl City and pick the new ‘Xmas Remix’ genre. Boom! You’re done.

Idir Alexander Ould Braham, Associate Producer on No Straight Roads, had this to say: “Almost every boss fight has been reimagined with a new Christmas makeover, and we can’t wait for players to revisit the game or experience it for the very first time with this new Christmas themed content.” 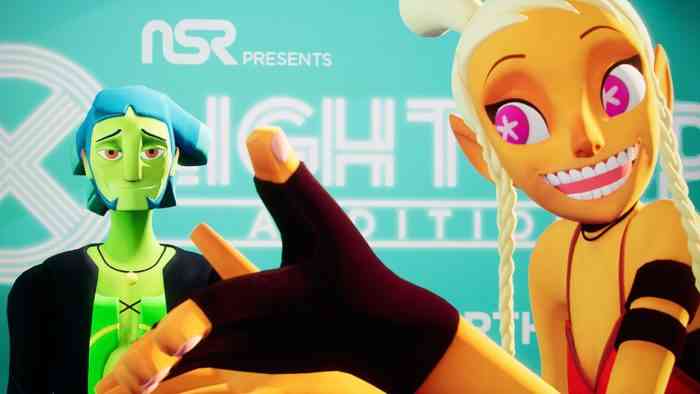 Almost every boss fight? Whoa! That’s a lot of work to put into something you aren’t even charging for. Maybe the real holiday spirit was with Sold Out and Metronomik all along.

No Straight Roads is available now on PS4, Xbox One, Nintendo Switch, and PC.

Banjo-Kazooie Is Heading to Switch as Part of N64’s Future Wave
Next
Cyberpunk 2077 Already Topping Steam Sales Charts
Previous
Total War: Warhammer 2 – The Twisted & The Twilight is Out and It Looks Amazing