No Straight Roads Review – EDM is Out & Rock is Back In

I love when developers switch up the norms of typical rhythm games and combine them with elements of a different genre, like The Metronomicon or Crypt of the NecroDancer. So you can imagine I was excited to hear about a new action-oriented title that would take the idea of beat matching and pair it with a satisfying ‘smash everything’ gameplay loop. And I’m happy to say, with Metronomik’s release of No Straight Roads, I experienced the zany adventure of Mayday and Zuke all the while listening to some great music and taking in the visually gorgeous art style. Though, it did come with some minor frustrations along the way.

No Straight Roads follows Bunk Bed Junction, an indie rock band consisting of Mayday, the energetic guitarist, and Zuke, the zen drummer. They’re on a quest to bring back rock in a world full of EDM. NSR, the record label, holds the Lights Up Audition every year in search of new talent that can power up the Qwasa. That’s the energy source that provides Vinyl City with the power of music. After failing to pass the audition, (despite a raving response from the audience) a sudden blackout overtakes their district. The two then find out that the backup energy that should have been used for the city is now being monopolized by the NSR to use for their own elites. Enraged by this discovery, Mayday and Zuke set out to defeat the ruling EDM artist of each district, hijacking their concerts, and reigniting the flames of rock and roll.

You can play through the story solo, taking control over both Mayday and Zuke and swapping between the two with a button press. But, if you rather, you can play with a friend via co-op mode. The controls are incredibly easy to pick up, and playing as either character is a ton of fun. Mainly because they feel and act so differently from each other. Mayday is an absolute steamroller with her guitar, bashing enemies down with strong attacks. While Zuke is about speed and combo-ing his strikes. At surface level, No Straight Roads looks and feels like a pretty standard action game. You’ve got your basic attack, roll and dodge buttons, and then an additional rock out button that can activate switches, open doors, and transform objects in the environment. The rock out attack can be upgraded via your band’s headquarters in the sewers to further unlock more areas and increase the power on the transformed objects.

Down in Bunk Bed Junctions’ home quarters that are the sewers, you’ll be able to decorate your living quarters. Cool items that you’ve found around the city and in battles can be used here, as well as upgrading your skills. It even has a space for a debriefing area. You’ll be able to upgrade Mayday’s and Zuke’s stickers, activate timed buff-powerups that are only good for a single heist, apply mods, and change up your ultimate duet. Mods are special attacks that can be keyed to your ZL and ZR buttons and your ultimate duet is the final power move that both characters can perform together. By pressing both the ZL and ZR buttons simultaneously once you’ve got a full power bar, you’ll hit the ultimate duet. The debriefing room is pretty self-explanatory, just giving you information on your targets. And, of course, we can’t forget the storage room, where the band’s pet alligator, Ellie, resides. Now, over in the Underground Gig, is where you’ll find your skill tree. Here you can better upgrade our hero’s individual skills by using their fan power. In order to increase your fanbase, you’ll have to go around gathering mini-qwasas and bringing back electricity to parts of the city. Get your name out there by doing good deeds and rocking to good music and you’ll be drowning in fans in no time. 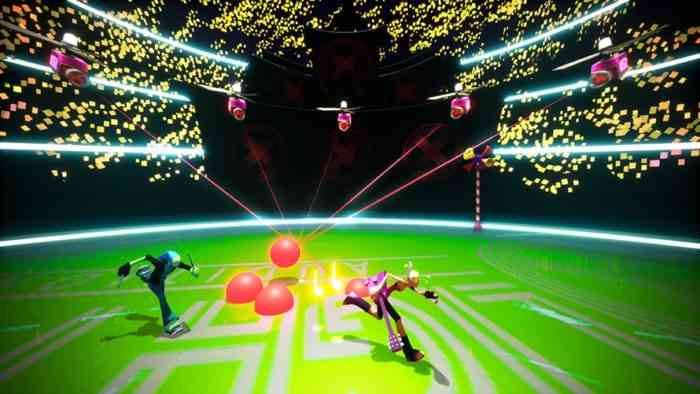 The art style is bright and unique and uses some really cool lighting effects to show off not only Vinyl City, but the various battle stages at their best. One of the few things I had immediately noticed – something that dulled the bright city life – was how drab all of the NPCs are. The NPCs are stuck in mostly stoic positions, nothing but shades of grey, gently bopping their heads back and forth. Perhaps this was done to easier figure out which characters can be spoken to and have voice lines. But, to be honest, those characters I chatted with didn’t really add much to the narrative and didn’t do anything to make me care about them. I would have preferred having NPCs who were just as brightly colored as the cool mood that Vinyl City gave off. Not to mention that while I was playing this in handheld mode, I did notice a considerable frame rate drop the longer I played and found myself glitching through walls often.

For being a hybrid-rhythm game, the music in No Straight Roads is incredibly good. Having enemies move in time with the music was a great idea – had it worked. I found that the game boasted about the musical battles, yet they end up being underwhelming. Yes, they do move in time with the beat (for the most part), but there were times where it felt that all of that was thrown out the window. Timing your movements with the enemies didn’t at all go along with the music. And parrying was made almost impossible if you were just going off of the beat. In a couple of instances, I found myself needing to turn off the volume to play properly and advance to the next level. 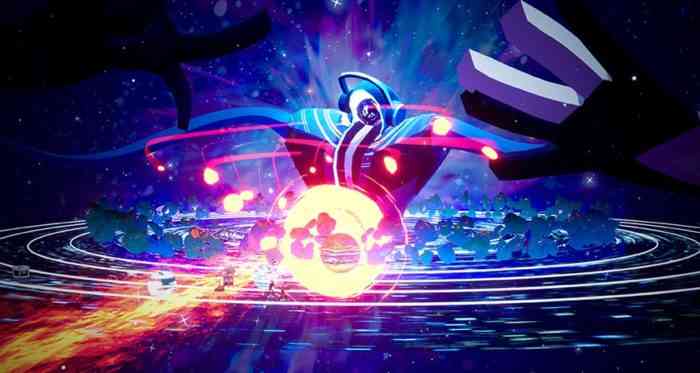 No Straight Roads is a wacky adventure with loveable characters. Mayday and Zuke just want to show the world that EDM isn’t the only kind of music out there – that rock is most certainly not dead. From the bright visuals to the hilarious dialogue and fun gameplay, as well as the option for couch co-op mode, it’s an easy pickup. While I, of course, had a few issues with the game, it’s all mostly forgiven with every quick and heavy whack of Mayday’s guitar.

*** Switch code provided by the publisher*** 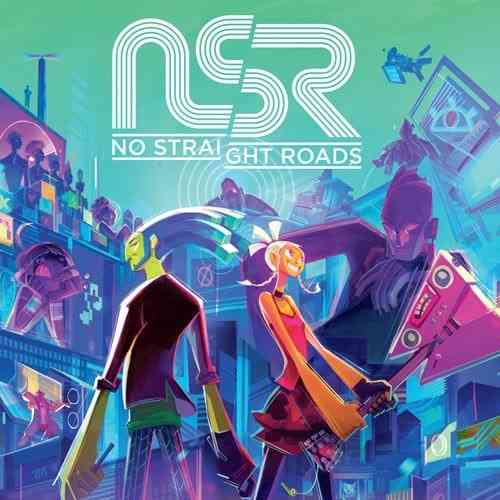