Evil Dead: The Game is Taking All Comers in 2021

Hail to the King, Baby

Once upon a time, Ash Williams had a normal life. Now he has a beloved movie trilogy, a divisive reboot film, a fun TV show, a musical you really should be listening to right now, a ton of comic appearances, and a cameo in Dead By Daylight. And he also has a new video game. The last time we talked about this, it was under the impression that Ash’s final appearance would be in Dead By Daylight, so we took the chance to express our condolences to a beloved series and set Ash to rest. He promptly burst up from the grave, because that’s what he does, and scared the living hell out of us in the process. The trailer is chilling in its own right, but we can’t put into words the emotion that flew through our heads when we heard the words “Necronomicon Ex Mortis.” Congratulations, Ash. You got us again. Looks like the story of Evil Dead is far from over.

In all seriousness, though, Evil Dead: The Game is shaping up to be spectacular. The graphics are excellent, combat looks fluid, and the character models are solid, but none of it holds a candle to the atmosphere. From the series’ trademark gore to the spooky forest environment to the iconic cabin in the woods, it’s all gorgeous and wonderfully realistic. The only thing that looks fake in this game is Bruce Campbell’s chin. Which does actually look that way in real life, so really, they did a great job rendering his ridiculously awesome face.

More importantly, though, you can play as Ash again! Bruce Campbell may have officially parted ways with the series, but Ash hasn’t, and we’re thrilled to see him in action one more time. The new game will let you take on all comers in co-op and PvP, which sounds amazing. 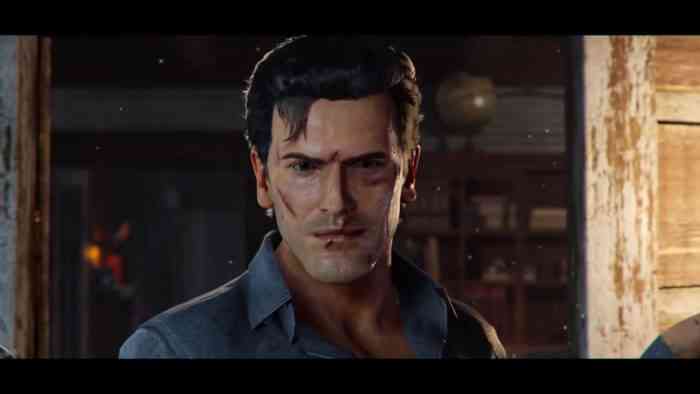 What’s your favorite incarnation of Evil Dead? Let us know down in the comments, or hit us up on Twitter or Facebook.