Trailers for games usually fall into two categories: gameplay trailers that show off the story or features and real-world trailers about how much players enjoy the game, the latter usually is unexciting and forced. Today however, EA released one of those real-world trailers that is actually really good. Not only that, but they are officially announcing Need For Speed: Hot Pursuit Remastered, which has been rumored for a while. The 2010 game will be arriving on current platforms in November. Even if you are not a racing fan, this trailer is pretty entertaining. 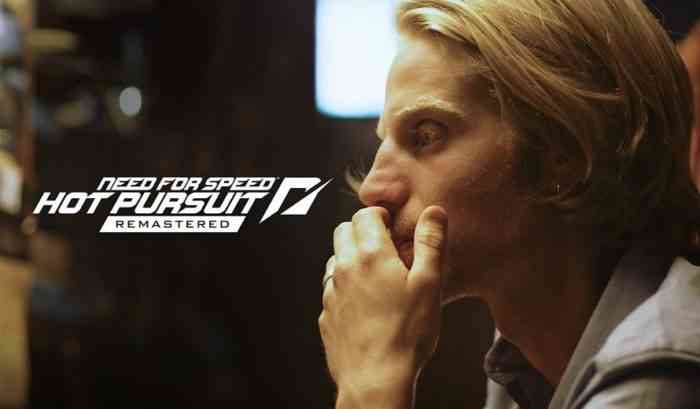 The trailer starts with a man waking up in the middle of the night, haunted by the memory of a man named Joseph; the man who beat his time in Need For Speed: Hot Pursuit. He tries to get by in his daily life, but the number 5:10 just keeps coming back to him. He gets flashes of his defeat at the hands of Joseph, seeing his smug face. He wants to leave that memory behind him, but there are even clues in the background of Hot Pursuit making a return. Joseph appears to be stalking him; watching him when he’s out on a run, leaving the Remastered game on his doorstep, taunting him. Finally, with Need For Speed: Hot Pursuit Remastered, he finally beats Joseph with a time of 5:09.

Instead of flashes between gameplay with messages like “Improved Visuals”, the trailer cleverly sneaks them into the background of the live action shots. It also tells a story of paranoia, regret, and redemption. I feel really weird talking about this trailer like a reviewer, but damn I like it. Need For Speed: Hot Pursuit Remastered will be coming out on PC, PS4, and Xbox One on November 6th and on Nintendo Switch on November 13th.

Did you play Hot Pursuit when it first came out? Let us know in the comments below.